Background:
Since early last year, fans have been seeing wave after wave of Buzzworthy Bumblebee figures appear at Target stores with little to no fanfare from Hasbro or Target. In mid-July 2022, a new wave of figures hit Target stores including the "Creatures Collide" 4-Pack, a redeco of Grimlock as Dinobot (you read that right) and a redeco of Terrorsaur. As of the writing of this review, this beast-based wave has not been listed on either Hasbro Pulse or Target for online orders. That means for now at least, the only way to get these figures are to luck upon them at Target (or perhaps have a helpful Target employee dig them out for you).

I have not yet reviewed the Kingdom Grimlock figure, but you'll want to check out my Kingdom Dinobot review as this review will focus on the changes made to the figure for this release. 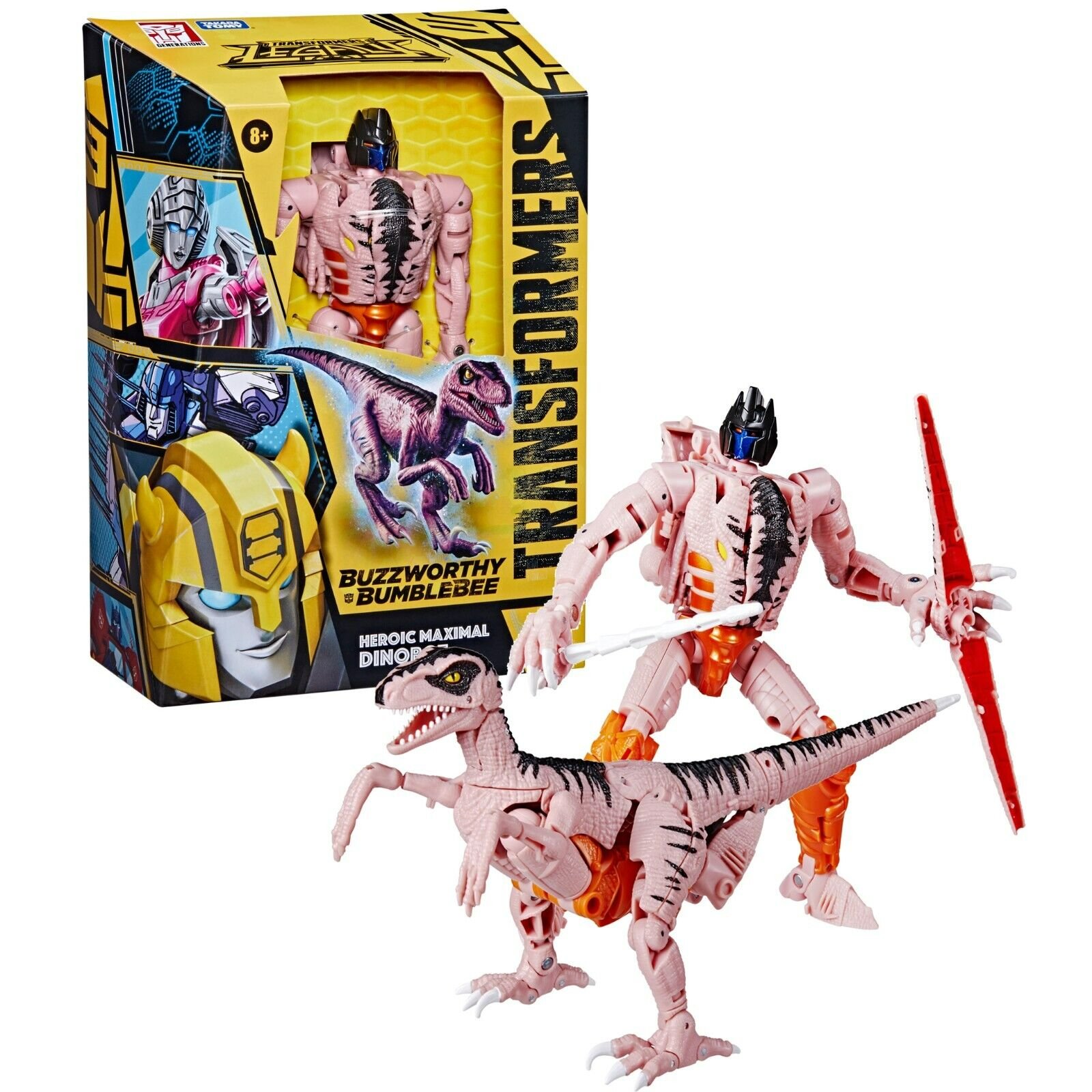 Packaging:
Unlike previous Buzzworthy Bumblebee releases, this figure is not packaged in a rectangular, Studio Series style box. Instead, the box's shape is more like a Legacy figure, featuring an angle on one side while being flat on the other. The angled side features artwork seen on other Buzzworthy boxes with Bumblebee's head being the most prominent while Arcee, Mirage and Optimus Prime also appear along with the Autobot symbol in yellow. The front of the box has the Buzzworthy Bumblebee logo and the vertical Transformers logo. The top of the box features the Legacy logo and the Generations logo (making this one weird figure to categorize). The front also features a window with no plastic over it. Indeed, even the hook on the top of the box is cardboard, so it looks like Hasbro is serious about avoiding plastic in their packaging. Inside Dinobot is attached to a cardboard tray in robot mode. Under the window is new artwork of Dinobot in beast mode, not recycled art from Kingdom. The flat side of the box has new artwork featuring Dinobot in robot mode. Once again this art is brand new and not recycled art from Kingdom, which I have to admit I find impressive.

The back of the box features Dinobot in both modes with the Legacy logo and it calls out a 28 step transformation. Interestingly, the name on both sides of the box says "Heroic Maximal Dinobot" instead of just "Dinobot" as the Kingdom box had on it. I believe this is intended as a callback to the 1996 Beast Wars Dinobot action figure which was described on the backing card as "The Heroic Maximal Dinobot". Overall this packaging is really nice and definitely grabs your eye on shelf.

Accessories:
Like the 90's Beast Wars Dinobot figure, this iteration of the character comes with two accessories: a tail/shield/weapon and a sword. Unlike the Beast Wars version of the tail accessory, this one does not have a spinning mechanism, so it is considerably thinner than the one from the 90's. However, like the original Dinobot accessories the tail splits open to reveal the sword inside. You can detach the sword and allow Dinobot to hold the two accessories separately.

The tail itself forms the "Cyber Slash" accessory, a shield/weapon combination piece. In the show Dinobot was seen using this mechanism as a shield and even as a helicopter style rotor blade! The package illustration shows a glow in the center, indicating it could also be a blaster. I do wish there was a spinning mechanism, but such features are unusual nowadays with Transformers toys, which is a shame. This piece is made up of pink plastic with black stripes painted on top, a nod to the deco on the 1996 Dinobot figure. The inside of the tail has red paint on it, another direct influence from the 1996 figure. The tail has a 5mm peg at the end, allowing you to attach it to either of Dinobot's hands.

The sword accessory is designed to look like the bones of the beast mode tail, a design element borrowed from the 90's Beast Wars figure. The tip however is sculpted like the tail weapon with a "skin" texture, presumably to blend in the two textures in beast mode. This piece is also made of pink plastic, but the actual blade of the sword is painted white. To accommodate Dinobot's hand design (which does not have the traditional fist ports) the sword's handle has a 5mm wide tab on it that slots into Dinobot's hand port. This looks great for Dinobot, but it also means this accessory cannot be used by most other Transformers as a sword.

Robot Mode:
When the Kingdom Dinobot figure was retooled and given a new deco as Grimlock, the designers also gave him a new head. This head carries over to this release and it's fantastic. This head sculpt is based on the head of the original 1996 Dinobot toy, specifically its "robot head" (not the "Mutant head"). The head's helmet section is curved, with flat points sticking up on the sides and a high crest in the middle. Instead of the face from the animated series, this one features narrow eyes, a thin nose and a mouth plate with a pronounced chin piece. It's a beautiful head sculpt and it looks like a modernized version of the 1996 Dinobot head sculpt.

The 1996 Dinobot figure had very different colors than the character would eventually wind up with on screen (and in the Kingdom toy line). Instead of featuring browns and gold, it was mostly pink with black stripes. The plastic colors on this figure are pink (intended to be a flesh tone), orange and a dark brown plastic. The dark brown plastic looks almost black under certain lighting, but it's a bit lighter than that. The pink of course references the pink plastic on the original Dinobot figure, though side by side the original 1996 pink looks a bit darker in tone. The orange references the translucent orange plastic on the 1996 figure. While I prefer the appearance of the translucent plastic, there have been examples of translucent plastic not quite holding up to wear and tear very well recently so I'm glad they used solid plastic instead.

Paint on this figure includes black stripes on the chest and back and and beautiful metallic orange paint on the torso and pelvic area. I wish they had used some of this metallic orange on the lower legs! The eyes are painted orange and his nose and mouth plate are blue. The claws on his hands are painted white, which connects visually with the sword blade. Sadly he lacks any stripes on his arms, which is the one big flaw in an otherwise awesome deco.

Dinobot has an above average twenty eight points of articulation in this form. This includes seven in each arm and six in each leg. You can store his accessories on the back by storing the sword in the tail, then connecting the tail piece to the port on the back. Want to add some accessories to Dinobot? You're in luck! He has 5mm ports on either side of his knees and 5mm ports under each foot. 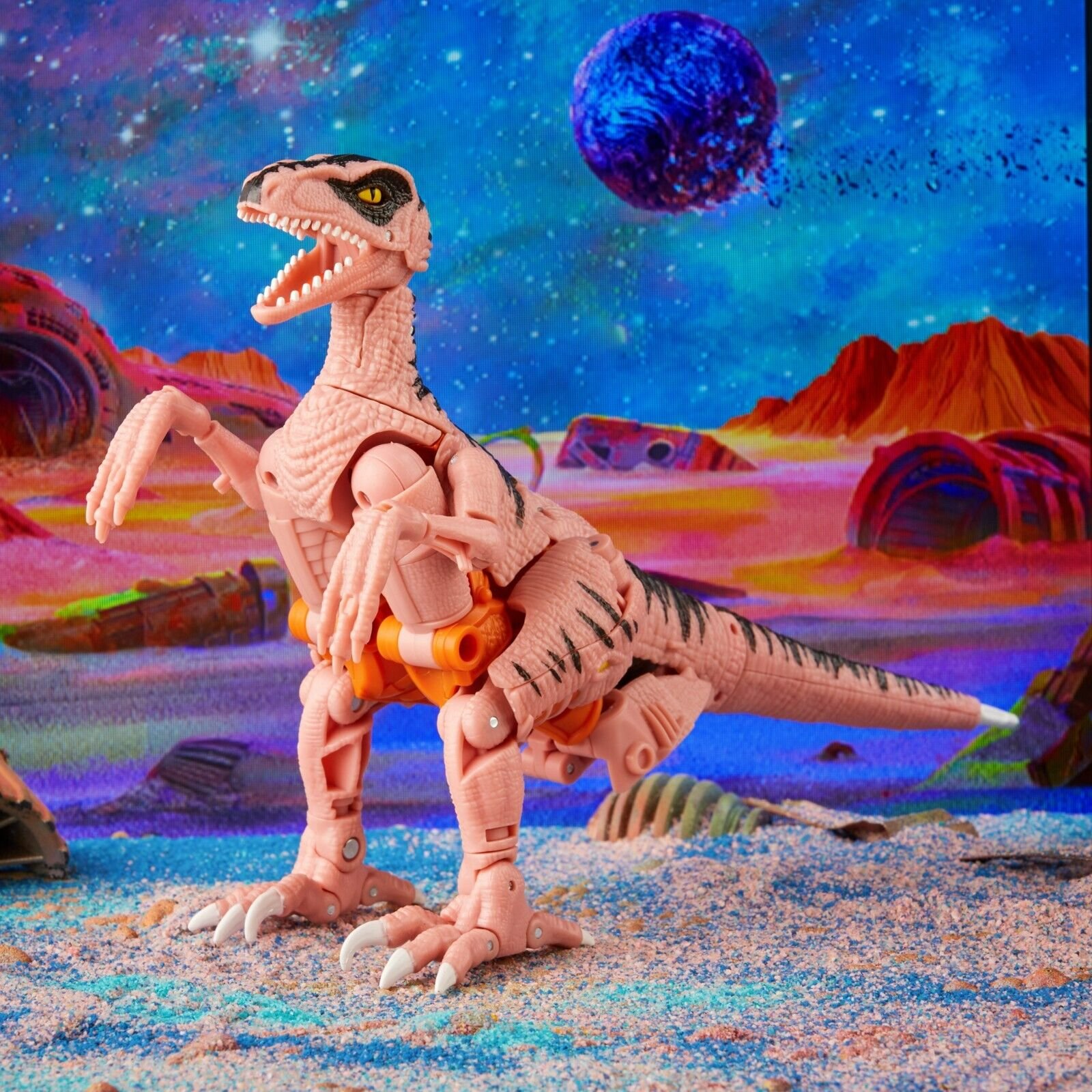 Beast Mode:
This mode features no retooling, so it is the same Jurassic Park style Raptor sculpt as the Kingdom Dinobot figure. Of course, the colors are dramatically different. Most of this mode shows off the pink plastic with black line patterns running from his snout all the way down to the tail. The legs also have some stripes on them. All this serves as a callback to the 1996 Dinobot figure and in that respect it works beautifully. Of course, a bit of orange plastic peeks out on the sides, but that is a limitation of the figure design. The white paint on the claws carries over to the feet in this mode, offering some nice contrast with the pink plastic.

There are twenty points of articulation in this mode, which is pretty extraordinary for a beast mode. These include the beast mode head being able to tilt up and down and open its mouth. Each arm has five points of articulation while the legs have seven each. Because of the way the robot knees are configured in this mode the 5mm ports face out to the sides. With the right sized weapons/accessories you could definitely add some firepower to Dinobot in this mode!

Final Thoughts:
Of all the beast-based Buzzworthy Bumblebee figures released in this wave, Heroic Maximal Dinobot is perhaps the least "necessary". Yet at the same time I cannot help but feel a jolt of nostalgia with this figure. I also appreciate how the entire concept of this figure is a fairly deep cut aimed squarely at fans who have a deep love for Beast Wars. In that respect, I have a lot of affection for this figure. Recommended!