This G1-inspired toy converts into radio mode in 20 steps and comes with a blaster accessory. Eject figure converts from robot to cassette mode in 8 steps.

Includes a Golden Disk card that reveals a possible destiny of a key character. Collect other Kingdom figures to reveal all 3 alternate destiny variants for each character! (Each sold separately. Subject to availability.)

Generation One introduced the world to one of the most iconic Transformers characters ever: Soundwave. With his distinct speech pattern, cool demeanor and awesome alt-mode it was inevitable that that the Autobots would eventually get their own counterpart to the Decepticon Communicator. In 1985, Blaster was released and featured in both the G1 cartoon and the 1986 animated movie. Like Soundwave, Blaster could hold several tapes in his chest who could tansform into smaller Autobots. That said, Soundwave has been given the toy treatment way more times than Blaster over the years though he has popped up in Generation twice, both times as a retool and redeco of Soundwave. One was his Cybertronian form and the more recent one was his Titans Return incarnation. Prior to both of those he had popped up in the second Universe line as a straight up redeco of Soundwave from Cybertron. He has had many other forms over the years of course including being an Action Master in G1 and as part of the Binaltech line. At long last, a new Blaster figure has joined the Generations line. Even better? This one is a brand new sculpt!

Packaging:
Blaster is packaged in a window box with the standard Voyager Class Kingdom box.  This includes showing off Blaster's box art on the angled side and his boom box mode in front.  You cannot see Eject through the window, but he is featured on the back of the box.  Blaster was one of the last releases in Kingdom, so Hasbro decided he would eventually see a re-release of him in Legacy.  Thanks to online sources, the official Hasbro product photography for Legacy Blaster has already popped up online so we can look at both even though at the time I am writing this the Legacy version has not yet been released.  Presumably the Legacy Blaster will be a straight up re-release of this version.

Accessory:
Blaster includes a rifle based on the design of his G1 weapon. It is a very distinct design, featuring a large circular opening at its base with a long barrel that has a suppressor like piece at the end. The top has a targeting scope and the back has a stock extension. I really love the way the designers updated the weapon but kept man of its core details. This weapon is black plastic with no deco. The circular opening is 5mm, allowing you to attach weapons from other figures to the rifle. It has a 5mm peg at the bottom allowing Blaster (and other Generations figures) to hold it.

Blaster includes one of his "cassette force": Eject. Introduced in G1, Eject is a huge fan of sports and had a tendency to speak using sports terminology.

Cassette Mode:
While it may be an outdated form by today's standards, Hasbro and Takara Tomy decided to keep Eject's original alt-mode: a cassette tape! It is rectangular in shape with openings for the tape reel sections. The rest of the details largely carry over from the robot mode so I will focus on those below.

It has been rumored that one of the gimmicks for the upcoming Legacy toy line is the ability for accessories to combine (and this has been supported by a lot of photos of upcoming products). Some are also supposed to be clear plastic, a callback to the combining weapons of the Energon series. To that end, Eject has been cast mostly in translucent blue plastic with some solid grey plastic on the back. Gold paint is used for detailing from the robot mode (more on that in a bit). This looks fantastic. It looks like Eject has some type of energy coursing through his body and if you hold it up to the light it looks very cool. The concern I (and many fans) have with this use of translucent plastic is that in time the plastic will become brittle and break, especially during transformation. Now, I don't have a time machine so I can't jump into the future five to ten years from now to see if Ejects are breaking all over the place. I have Energon weapons from 2004 (made of translucent plastic) that are still fine to this day. However, I will say that it is a valid concern and I hope down the road there will be a version of Eject released that uses an opaque and stable kind of plastic. 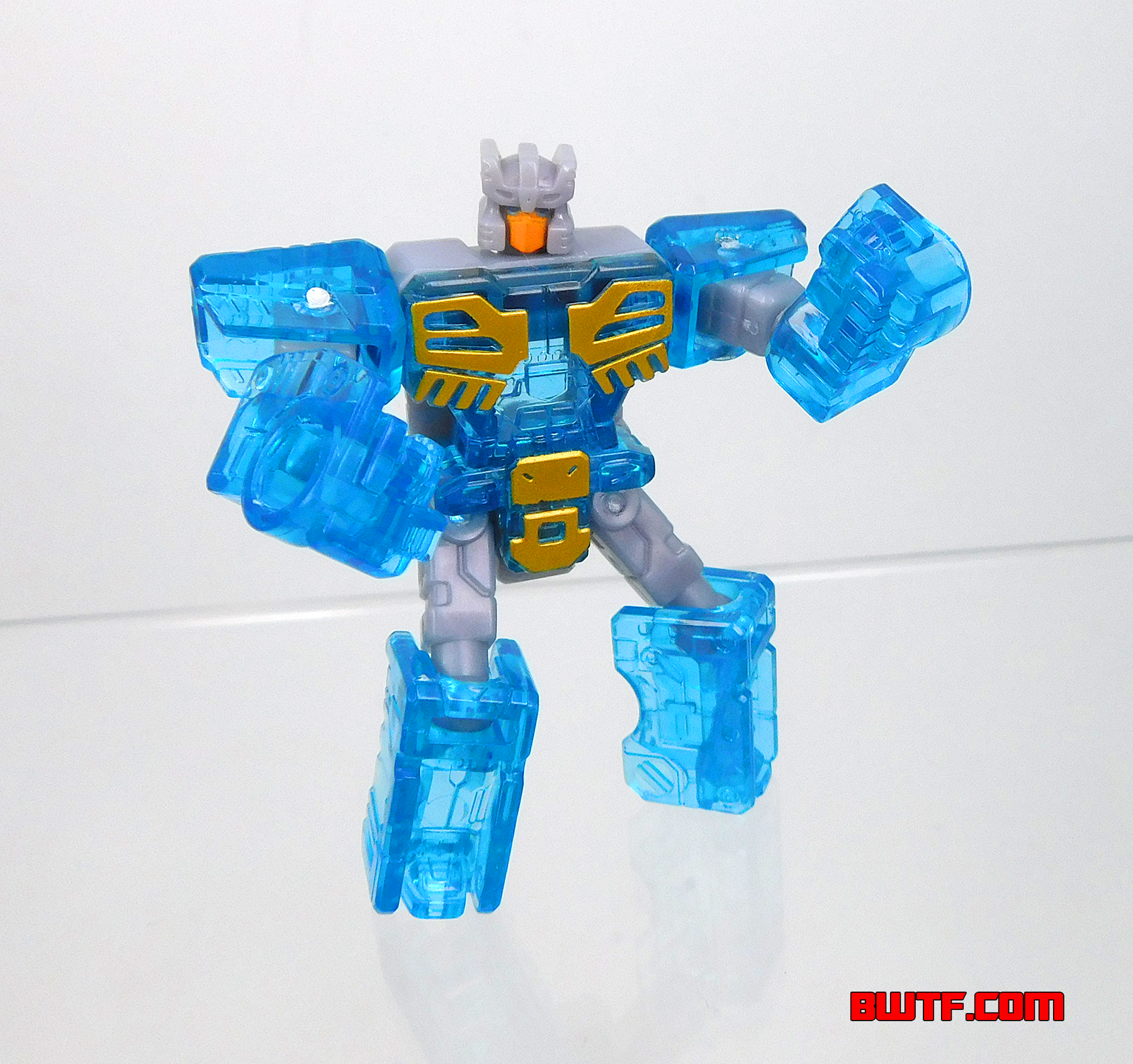 Robot Mode:
Eject's robot mode has a fantastic sculpt. The head sculpt has the "helmet" section with three sections extending upward and a mouthplate. The chest has distinctive designs on them that look amost like stylized wings. While a bit hard to see because of the uniform translucent blue, he has distinct feet and fists sculpted in as well. I really like this sculpt and definitely want to see it used to create Rewind at some point in the future.

There are thirteen points of articulation on this figure including three in each arm and leg. The tape reel openings on his arms have 5mm ports, which is cool and likely intended to have him combine with other weapons to be released in the future. However, no weapons were included for him in this set so the feature is a bit wasted in this set. That said, if you have extra weapons lying around from other figures you can absolutely use them with this figure.

Final Thoughts on Eject:
Eject has a fantastic sculpt and a good design. While he looks great, the use of translucent plastic is of concern for the future.

Robot Mode:
Unlike the current Studio Series 86 figures, this version of Blaster is a combination of G1 cartoon influences meshed with an updated take on the G1 toy. The result is an amazing sculpt. His proportions are largely based on the G1 cartoon model, with a blocky design that is mostly made up of squares and rectangles. I do wish his shoulders were a tad bulkier to give him a wide shouldered look but in terms of his silhouette it is instantly identifiable as Blaster. With such a blocky form, it would be easy for Blaster to look boring, but thanks to a ton of sculpted detail he does not. Here's a rundown of some of my favorite details:

On top of everything above, Blaster has a bunch of additional details including several line details and cylinders on the back. Overall the sculpt is very well done and I am glad after so many years of being a retool of Soundwave he now has a distinct and excellent sculpt of his own!

Blaster is made up of red, grey, black and translucent blue plastic. The red makes up most of the upper body with grey used on the lower body. Black breaks up the red and grey throughout the body. The cassette window is made up of translucent blue plastic. Grey paint is used on his head while black is used on smaller details on the shoulders and the back. Red paint is used on the raised hip details and finally the cassette door is (mostly) painted a bright yellow that contrasts beautifully with the other colors on this figure. A large Autobot symbol is tampographed onto the left side of the chest, a direct callback to the G1 toy's sticker in the same spot.

There are twenty four points of articulation on this figure. That includes five in each arm and six in each leg. The legs still include ankle tilts, which have become a standard part of Transformers design the past few years and I love it. In a fun design choice, his right fist is designed with the pointer finger extended. This allows you to pose him to look like he is pushing the buttons on his torso to open his chest compartment! Push the buttons and the chest compartment will open up, allowing you to fit Eject inside. Blaster would not have been "complete" without this feature so I am very happy to see it incorporated into this figure.

Blaster has a lot of 5mm ports to attach accessories. Each arm has two on the sides, one in the back of the shoulder and one in the fist. Each leg has one 5mm port on the sides and the back has three. On top of all that the bottom of the feet have 5mm ports in them. Given that the Weaponizer/Modulator/Fossilizer era is rapidly drawing to a close with the end of Kingdom I was surprised to see this many ports on the figure. That said, if the upcoming gimmick for Legacy (where Blaster will see a re-release) is "weapons" focused then this will make perfect sense.

Boom Box Mode:
The G1 Blaster figure had a cool Boom Box mode and even to this day, it looks cool. Kingdom Blaster's Boom Box Mode is designed with that mode in mind, but then bumps the detailing up several notches. Like the original Blaster this one has a handle on top, speakers on the sides with the cassette door and buttons in the middle. This time out Blaster has several additional details including dials, buttons and what may be additional rectangular buttons or perhaps even displays to show volume. The speakers have bars running across them reminiscent of those on the Lasonic Boom Box from the 80's. I love these details. It not only looks great but it helps distinguish him more from his G1 counterpart. 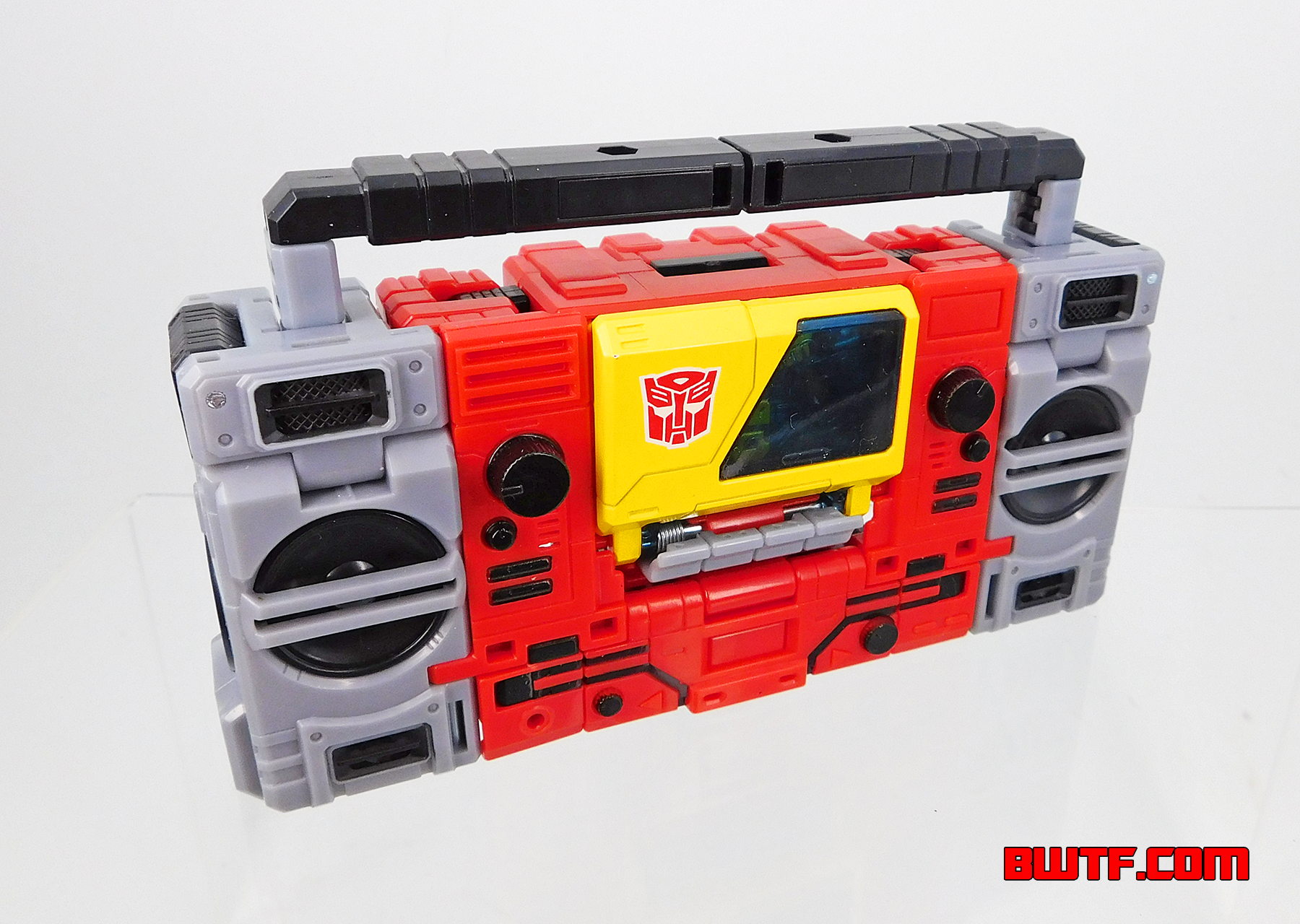 This mode compresses the various colors from the robot mode into this form, but black paint helps fill in a lot of the detailing which contrasts nicely against the red and grey plastic. Once again the yellow cassette door acts as a bright center for the deco and it looks great.

While he may be a Boom Box, you can attach accessories to Blaster in this mode thanks to the five 5mm ports on his back. The cassette door feature works in this mode (as it should).

Final Thoughts:
Kingdom Blaster is awesome. It is great to finally see Blaster get his own sculpt and not be a retool and redeco of Soundwave. Including Eject is a huge bonus as well. Highly recommended!