Official images and text below in italics are from Amazon.com:

Beastify the battlefield! Worlds collide when the Maximals and Predacons join the fight, coming together with the Autobots and Decepticons in an epic battle that will alter their destiny forever. Primal power floods the battlefield as the fierce beast modes of the Maximals and Predacons are unleashed! Unleash the primal power of the beasts with this Dinobot collectible figure, featuring a detailed beast mode with intricate molded dinosaur scale texture. Toy converts to Beast Wars-inspired raptor mode in 28 steps and features articulated claws and a posable jaw for realistic velociraptor poses. Tail detaches from raptor mode during conversion and becomes his Cyber Slash tail weapon and sword accessories. No matter the weapon or the foe, Dinobot always fights with honor. Includes a Golden Disk card that reveals a possible destiny of a key character. C Collect other Kingdom figures to reveal all 3 alternate destiny variants for each character! (Each sold separately. Subject to availability.)

When Beast Wars Transformers debuted on TV, a familiar theme played out in the first episode as the Predacon Dinobot turned on his leader, Megatron. He challenged Megatron for leadership of the Predacons - and promptly lost the fight giving echoes of the G1 Megatron/Starscream dynamic. However, as Dinobot returned and joined the Maximals, fans would learn that this character was very different than the Decepticon Air Commander. Following a code of honor and a formidable warrior, Dinobot quickly became a fan favorite character up to his death in the amazing episode "Code of Hero". He would return later in a new form only to sacrifice himself once again, helping the Maximals win the Beast Wars. Now decades after the character first appeared on toy store shelves, fans have a Voyager Class version in Kingdom to add to their collections!

Packaging:
A new style of packaging has been introduced with Kingdom. The shape is very similar to what has been seen with Siege and Earthrise, with a rectangular box that has an angled panel on the left. This time however the box does not have a window in front that shows off the entire figure. Instead, the window is much smaller and basically shows the figure from the mid-body up. This small window has plastic over it, but what this allows for is artwork featuring the character in both modes, something that is extremely uncommon for the Transformers line. Like previous Generations packaging the Transformers logo is set vertically on the right side with the Generations and Takara Tomy logos above it. On the lower part (under the window) is the Kingdom logo. On this box, Dinobot is in beast mode on the front charging at an enemy, claws and teeth ready to hack and slash while the robot mode is on the side holding his tail weapon/spinning shield. The artwork is absolutely beautiful!

The back of the box shows Dinobot in both modes calling out a twenty eight step transformation. Above him is a modified Predacon symbol which appears to incorporate elements of the Decepticon symbol. In the corner is a nice, classic callback featuring the Transformers logo with the "More than Meets the Eye" tag line under it. Overall this packaging is beautiful and I think it is really going to pop on store shelves.

Boxed figures such as Dinobot include a card featuring characters in the line and their potential "destinies". There are 16 variants of these cards to collect and they come randomly packaged in the inserts. I also highly recommend being careful with the cardboard trays. Do not just toss them out. Look on the back and sides to be sure you have removed all the accessories and cards before you dispose of them.

Accessories:
Like the 90's Beast Wars Dinobot figure, this iteration of the character comes with two accessories: a tail/shield/weapon and a sword. Unlike the Beast Wars version of the tail accessory, this one does not have a spinning mechanism, so it is considerably thinner than the one from the 90's. However, like the original Dinobot accessories the tail splits open to reveal the sword inside. You can detach the sword and allow Dinobot to hold the two accessories separately.

The tail itself forms the "Cyber Slash" accessory, a shield/weapon combination piece. In the show Dinobot was seen using this mechanism as a shield and even as a helicopter style rotor blade! The package illustration shows a glow in the center, indicating it could also be a blaster. I do wish there was a spinning mechanism, but such features are unusual nowadays with Transformers toys, which is a shame. This piece is made up of brown plastic with no deco. The tail has a 5mm peg at the end, allowing you to attach it to either of Dinobot's hands.

The sword accessory is designed to look like the bones of the beast mode tail, a design element borrowed from the 90's Beast Wars figure. The tip however is sculpted like the tail weapon with a "skin" texture, presumably to blend in the two textures in beast mode. What most fans find odd is the choice of deco. The hilt is gold, but the sword "blade" is painted a metallic purple/pink color. This color is meant to look like the energy that was occasionally shown surging through the sword in the animated series. To accommodate Dinobot's hand design (which does not have the traditional fist ports) the sword's handle has a 5mm wide tab on it that slots into Dinobot's hand port. This looks great for Dinobot, but it also means this accessory cannot be used by most other Transformers as a sword. 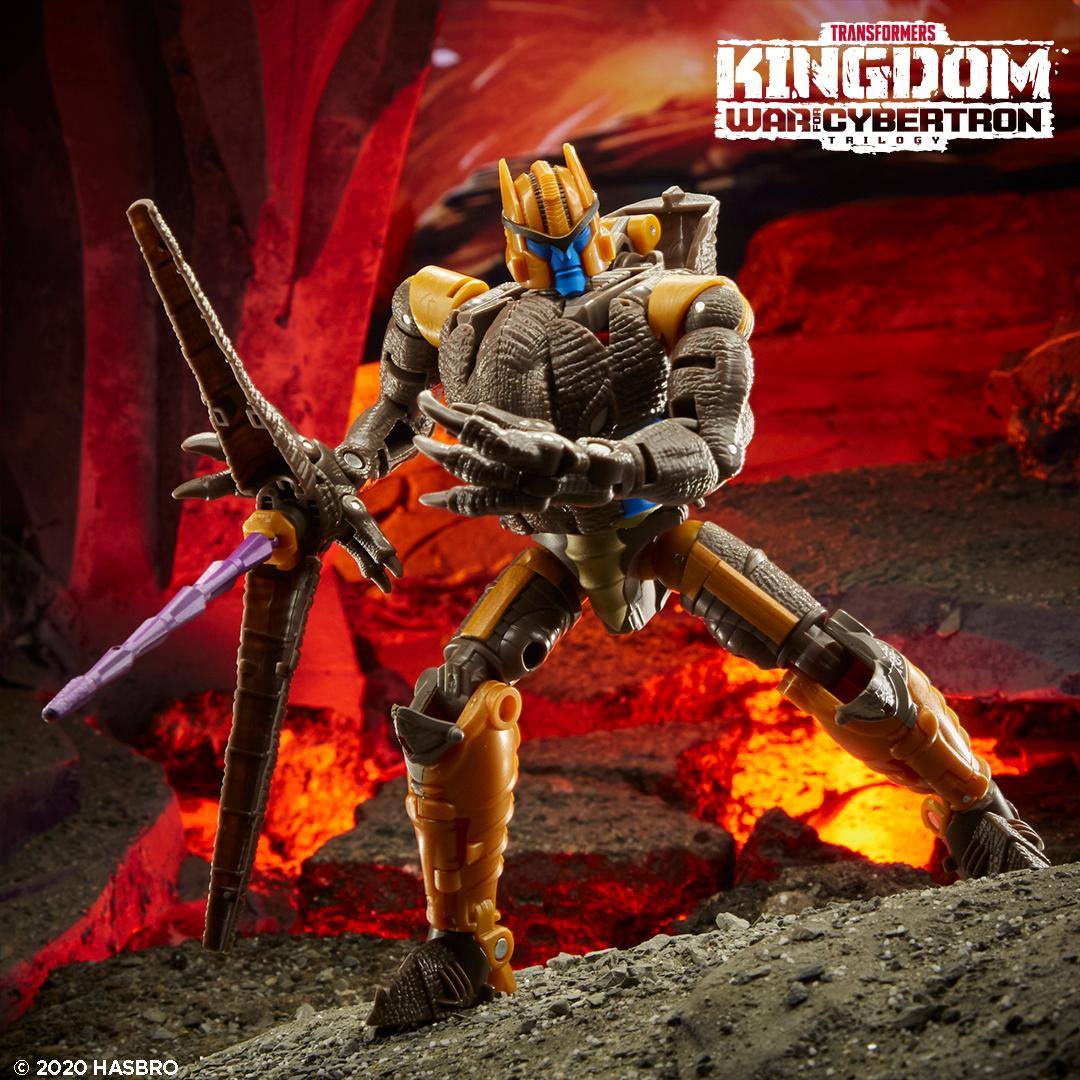 Robot Mode:
Like Kingdom Optimus Primal, the designers used the animation model from the 90's Beast Wars series as the foundation for the design of this robot mode. From a sculpting perspective this figure looks like it jumped out of the cartoon onto my desk and I am very impressed. The silhouette looks just like the animated character featuring an almost athletic build complete with arms that look muscular and sharp points at the feet, knees and head. Other details inspired by the animated series include:

While his sculpt is fantastic, Dinobot's deco is where the figure falls short of total greatness. The figure is mostly made up of brown and gold plastic, which are good foundational colors for the character. However, much of the deco is focused on the black and blue details on his head, some white on the beast mode "eyes" on his chest and a bit of gold on the legs. What is missing however are the light stripe lines that were a large part of the character's color pattern. From his arms to his torso, these stripe designs added texture to the character's animation model and not having it here makes it kind of plain looking. Some talented fans have painted these stripes onto this figure and it makes a world of difference. I speculate this deco was left off due to cost, and that is a real shame.

Dinobot has a whopping twenty eight points of articulation in this form. This includes seven in each arm and six in each leg. You can store his accessories on the back by storing the sword in the tail, then connecting the tail piece to the port on the back. Want to add some accessories to Dinobot? You're in luck! He has 5mm ports on either side of his knees and 5mm ports under each foot.

At least one friend of mine has reported that a lot of the tabs do not stay in place. For me, the tabs that are most problematic are the ones on the thighs. They tend to separate and create a seam when you pose the figure. However, the other tabs hold fairly well on my copy of the figure, so this could be a quality control issue. Be warned, fellow fans.

Like the Jurassic Park 'raptor, this figure has a head with a long snout, clawed hands in front, powerful looking legs with a "hook" claw on each foot and a long tail pointed back. The designers did a great job of concealing as much of the robot mode as they could in this mode. Some of the robot legs stick out in the front and from a certain angle you can see the robot feet of course, but other than that he looks like a dinosaur figure. The texture of the "skin" sculpt is fantastic with a lot of lines and folds that suggest organic skin rather than angled, robotic parts. Visually the details are beautiful. Again, from a sculpting perspective this figure really delivers!

Unlike the robot mode, this form does have the aforementioned "stripe" designs. These can be found on the head, the thighs and running along the main body. Unlike the animation model where the stripes were very clear and sharp, this deco makes them a bit more subdued, but they are there. His beast mode teeth are painted white and the eyes are painted in as well. I really like the deco in this mode, though I would not have minded if the stripes were painted a lighter color to make them pop more. I honestly cannot shake the suspicion that at some point, either Hasbro or Takara Tomy will wind up using this figure for a redeco that more closely matches the original Beast Wars Dinobot's animation model.

There are twenty points of articulation in this mode, which is pretty extraordinary for a beast mode. These include the beast mode head being able to tilt up and down and open its mouth. Each arm has five points of articulation while the legs have seven each. Because of the way the robot knees are configured in this mode the 5mm ports face out to the sides. With the right sized weapons/accessories you could definitely add some firepower to Dinobot in this mode!

Final Thoughts:
When I first saw photos of Dinobot I felt like he would be a "mini-Masterpiece" along the lines of Studio Series Hot Rod. He comes pretty darn close. The sculpt looks great in both modes, but of course being a Voyager Class and not a Masterpiece he does have some imperfections. For one, the faux beast mode eye piece on his beast mode thighs is very obvious. Also, the reliance on tabs can work against the figure. The deco could have also been better. It's not bad, but it's not "show accurate" to the original Beast Wars show either. Overall I love this figure and do highly recommend it, but that does not mean it's perfect.