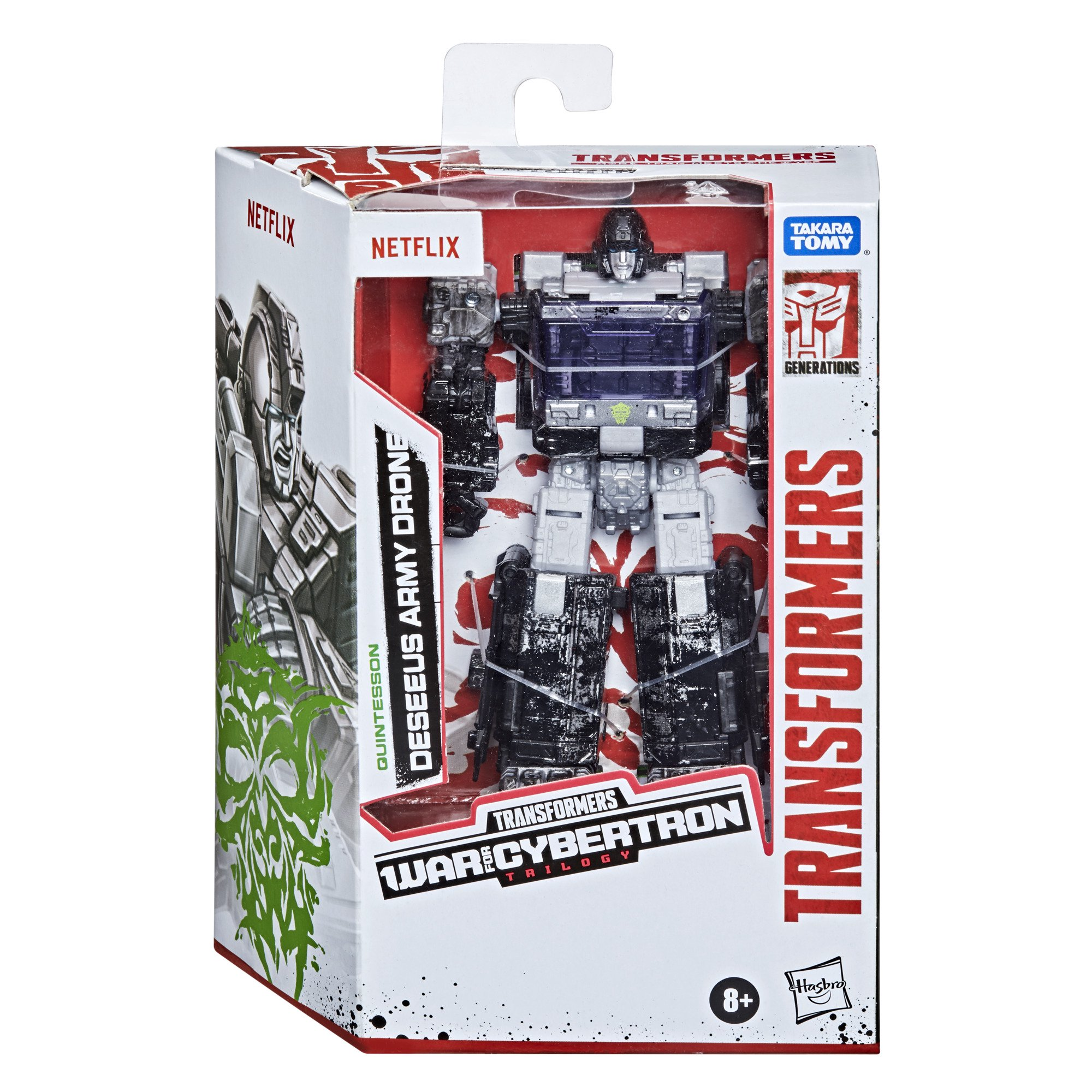 Official images and text below in italics are from Walmart.com:
Transformers Toys Generations War for Cybertron Trilogy Series-Inspired Deluxe Deseeus Army Drone Action Figure - Ages 8 and Up, 5.5-inch Build the ultimate battlefield inspired by scenes from the Transformers War for Cybertron series. This pack includes a Deluxe Class 5.5-inch scale Deseeus Army Drone figure inspired by the character as seen in the War for Cybertron series. With 41 deco ops and battle-worn details this is the most series-accurate version of the character.

This Deseeus Army Drone toy converts to his Cybertronian truck mode in 15 steps, includes a series-inspired accessory, and features a Quintesson faction logo to match the character's look in the show. Fans can collect other figures inspired by Transformers characters from the series. Pose them out to recreate favorite scenes from the Transformers War for Cybertron series! (Each sold separately, subject to availability.) Fun for adults and kids ages 8 and up! Transformers and all related characters are trademarks of Hasbro. Includes: figure, accessory, and instructions. Figure scale: 5.5 inches Ages 8 and up Warning: Choking Hazard - Small parts. Not for children under 3 years. © 2021 Hasbro. All Rights Reserved. Manufactured under license from TOMY Company, Ltd. 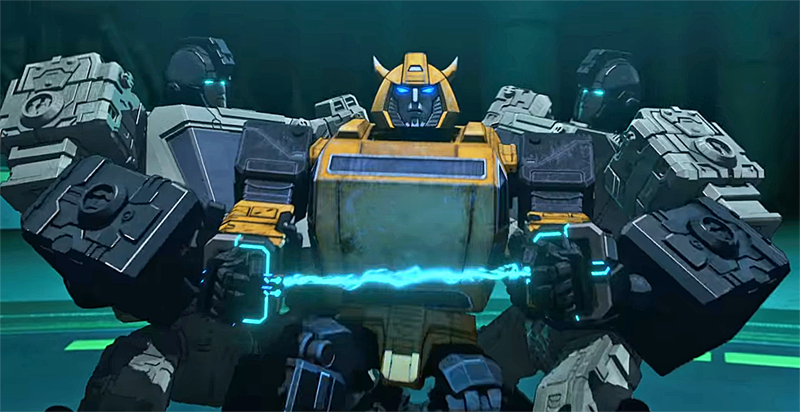 Background:
In 2021 Wal-Mart released a series of exclusives based on characters who had appeared in the War for Cybertron series on Netflix. One of these figures was the Deseeus Army Drone. These Drones appeared in the Earthrise series as the servants of the Quintesson Deseeus. Traditionally fans would expect a Quintesson to have Sharkticons at their disposal, but most likely due to budget the show had to turn to reusing an existing character model for these Drones. The show wound up using the Siege Ironhide model for Desseus' Drones. This review will focus on the changes made to the base figure for this release.

Packaging:
The packaging for the Netflix Wal-Mart exclusive figures was very different than the brightly colored main line boxes. In general they had the same rectangular shape with an angle on one side, but these had a white background with mostly red and black text on them. In a rare branding move, the Netflix logo is set over the plastic window that features the action figure. Other aspects including the Generations logo and vertical Transformers logo are still present. The angled side of the box shows the Deseeus Drone's artwork in a black and white sketched style with the Quintesson faction symbol on top. The Drone's allegiance is called out in green lettering as "Quintesson". This is called out again on the back where the figure is shown in both modes calling out a 15 step transformation with the Quintesson faction symbol. I really love the look of these boxes. They're clean and eye catching while leaning towards (relative) minimalism.

Accessories:
The Deseeus Army Drone includes the same "W-35 LR Doomblast Forge Launcher" weapon that was included with Ironhide. The front appears to be an oblique homage to the rocket launcher built into G1 Ironhide's trailer vehicle. Like that rocket launcher this one is rectangular in shape, but instead of just one rocket in the front it has tubes for six. The weapon is long, extending back with what looks like a handle/shoulder rest in the back. There is some beautiful sculpted detail running along the sides and bottom.

The Launcher is made of silver plastic. The front portion has a beautiful spray pattern on it that looks like a burn pattern. The individual rockets inside the front section are painted bright green, offering a nice contrast with the silver and black. The exceptional deco on this weapon is a preview of what is to come with the figure itself.

The Launcher features three different 5mm pegs. Each allows a figure to hold the weapon in various positions. It can be held like a blaster, or over the shoulder or even just to the side. The peg towards the back is used to hold the weapon as if it were a giant hammer. Just swing down the front end and now the weapon takes on an especially brutal configuration! Even more fun, the back of the hammer mode has two connector points for Blast Effects from Battle Master figures. That makes the hammer look "rocket powered" which is very fun. 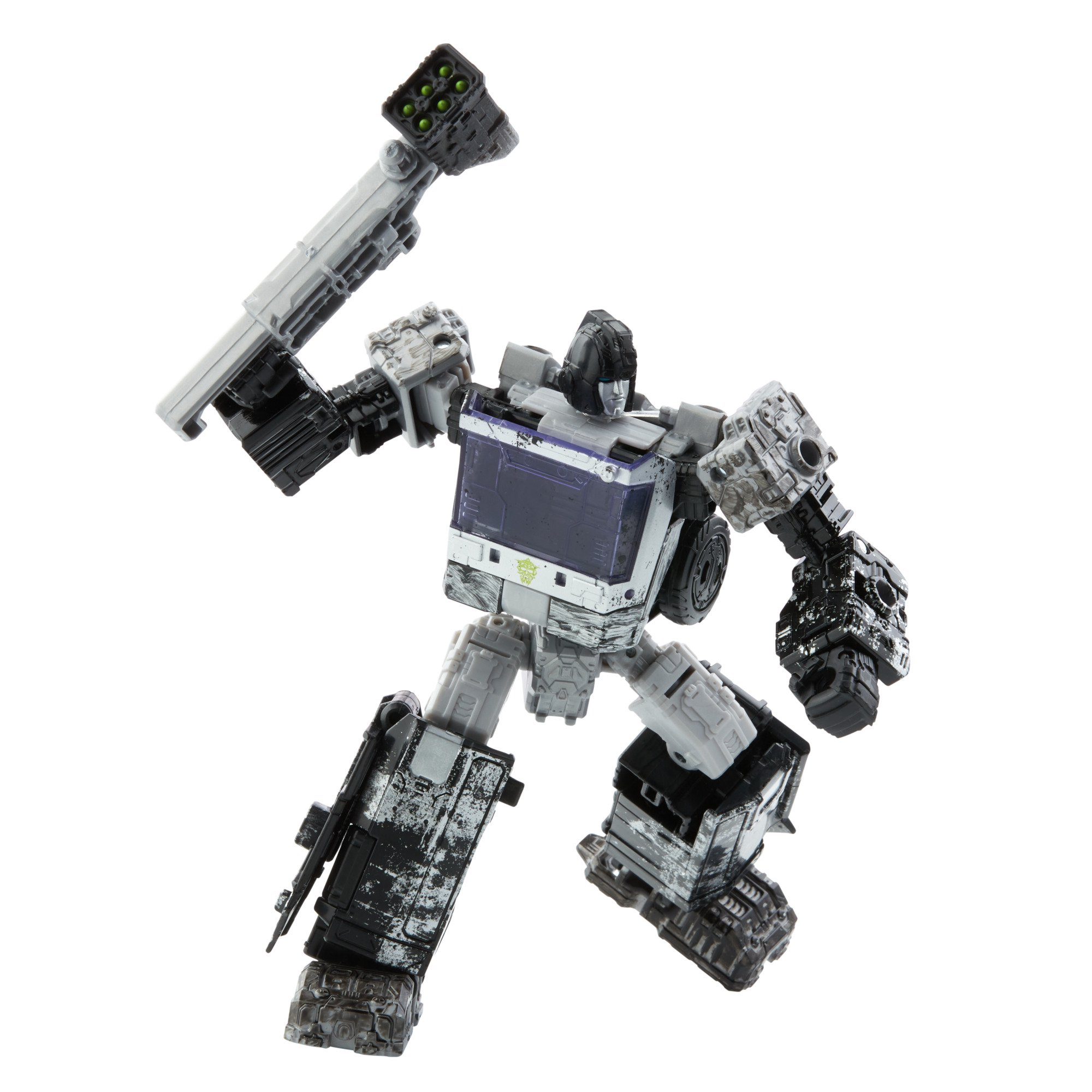 Robot Mode:
It feels like a weird thing to say, but Deseeus Army Drone has one of the most exceptional decos in the War for Cybertron line. The Siege aesthetic especially heavily focused on featuring distressed and "battle damaged" surfaces on figures Deluxe Class and up and this figure embodies that look almost better than any other figure in the line (only Voyager Class Megatron's Wal-Mart release beats it in my opinion).

The Deseeus Army Drone is made up of silver, black and translucent purple plastic. These colors largely serve as a relatively neutral canvas for a ton of silver and black brush work that is featured on almost every part of this figure. This is important to note because one of the weaknesses of the battle damage deco is that it was not always consistent on Siege figures. One example is Siege Sideswipe who had nice battle damage on his legs and waist area but almost none on other parts like his arms and chest. Here however only the thighs and back are missing damage detail and honestly with so much of the detail elsewhere they're not really needed. The finishing touches are blue eyes and a neon green Quintesson faction symbol (which looks super cool and fierce). I cannot overstate how much I love this deco. It really leans into the gritty look Siege was going for but didn't always achieve due to budget.

This figure has three connection points for Blast Effects from Battle Master figures. Each shoulder has one and the top of the chest section has one off to the left. He is a lot of fun to play with.

I was relieved to see that the panels on the sides of the legs have been fixed. On Ironhide they popped off way too easily. Now they stay attached during transformation. 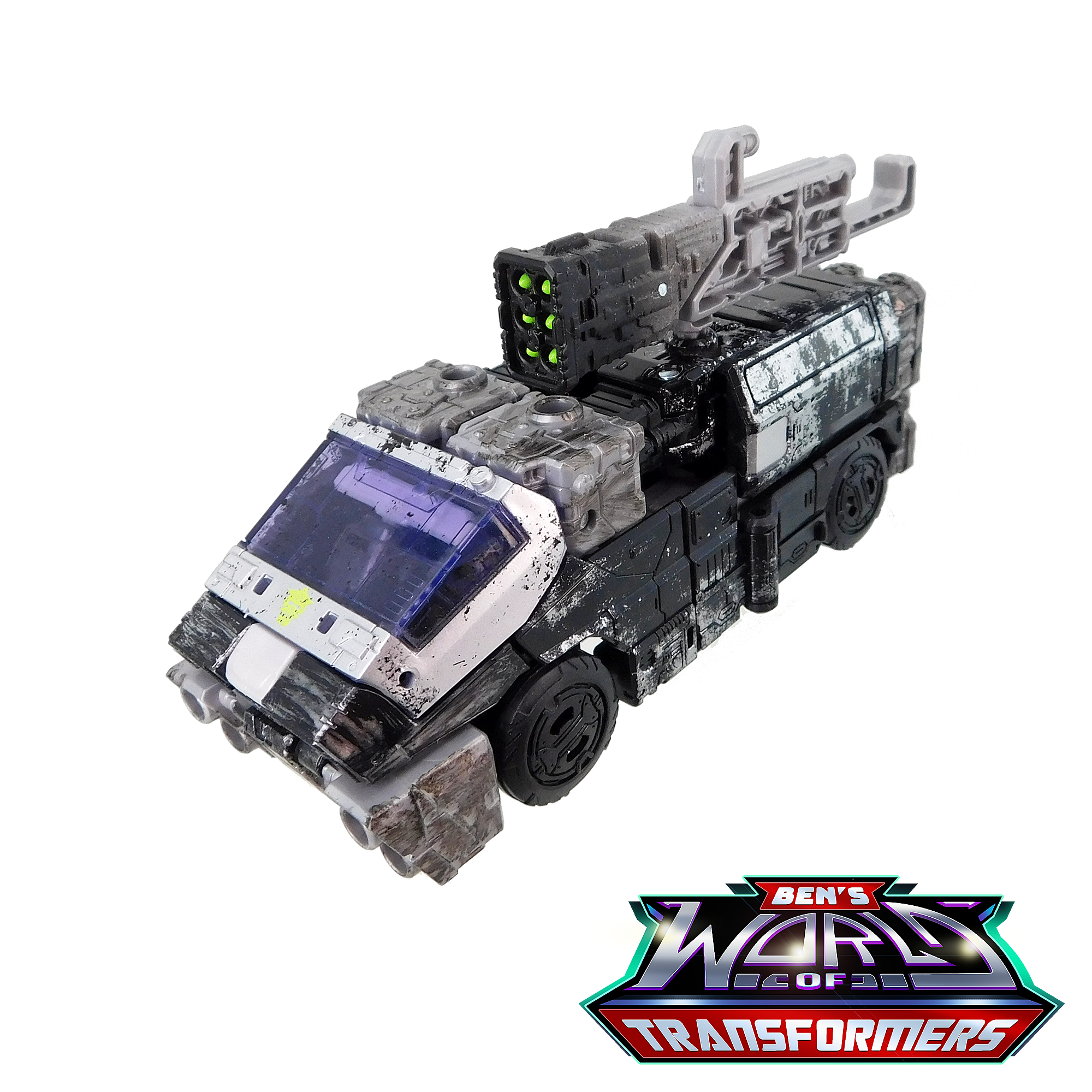 Vehicle Mode:
Thanks to the sheer amount of deco in robot mode, the vehicle mode is also covered from front to back in detailing. Except for a tiny bit the the middle (where the robot elbows are located) and black panels on the sides towards the back, there is battle damage deco all over this figure. This mode also helsp accentuate one of my favorite details: the windshield piece. The edges are painted silver, then there are black flecks painted on top of that. It's this attention to detail that absolutely won me over with this figure.

There are six 5mm ports you can use in this form. Four are on top and two are on the back. His own weapon fits nicely on top.

Final Thoughts:
I absolutely loved the Siege Ironhide action figure, flaws and all. This figure not only fixes the main structural issue but it also gives it an amazing deco. Highly recommended!