2017 was a milestone in Transformers history. The live action movie series was now ten years old meaning an entire generation of fans had grown up in an era where they had a live action Transformers theatrical film every other year to watch. In 2018 Hasbro launched the "Studio Series", a "Generations"-esque line of figured focused on the live action movies. The series boasted toys that were made in rough scale with each other using the CAD files from Paramount Pictures as the basis for the design. Part of the idea was also to fill in gaps in previous lines by making characters who had not appeared in the line previously.

All that said, Thundercracker is an exception to this. While numerically he is part of the "Studio Series" this figure was an exclusive to Toys 'R' Us and like most exclusive toys it was a retool and redeco of a previous figure: "The Last Knight" Nitro. That means this figure is a more "traditional" movie figure, meaning it was largely based off of initial concept art for the character, Nitro Zeus instead of his final appearance in the film (I detail the changes in my Nitro review).

The live action movie version of Thundercracker is an "off-screen" character who never actually appeared in the films. However, he is not a new character. There was a Voyager Class figure in the toy line for the first movie, a K-Mart exclusive Legends Class figure and then a Deluxe figure in the "Dark of the Moon" toy line. Given that the packaging for this character uses the "Dark of the Moon" logo, it is reasonable to assume that this is an "off-screen" form he somehow took some time during that film. 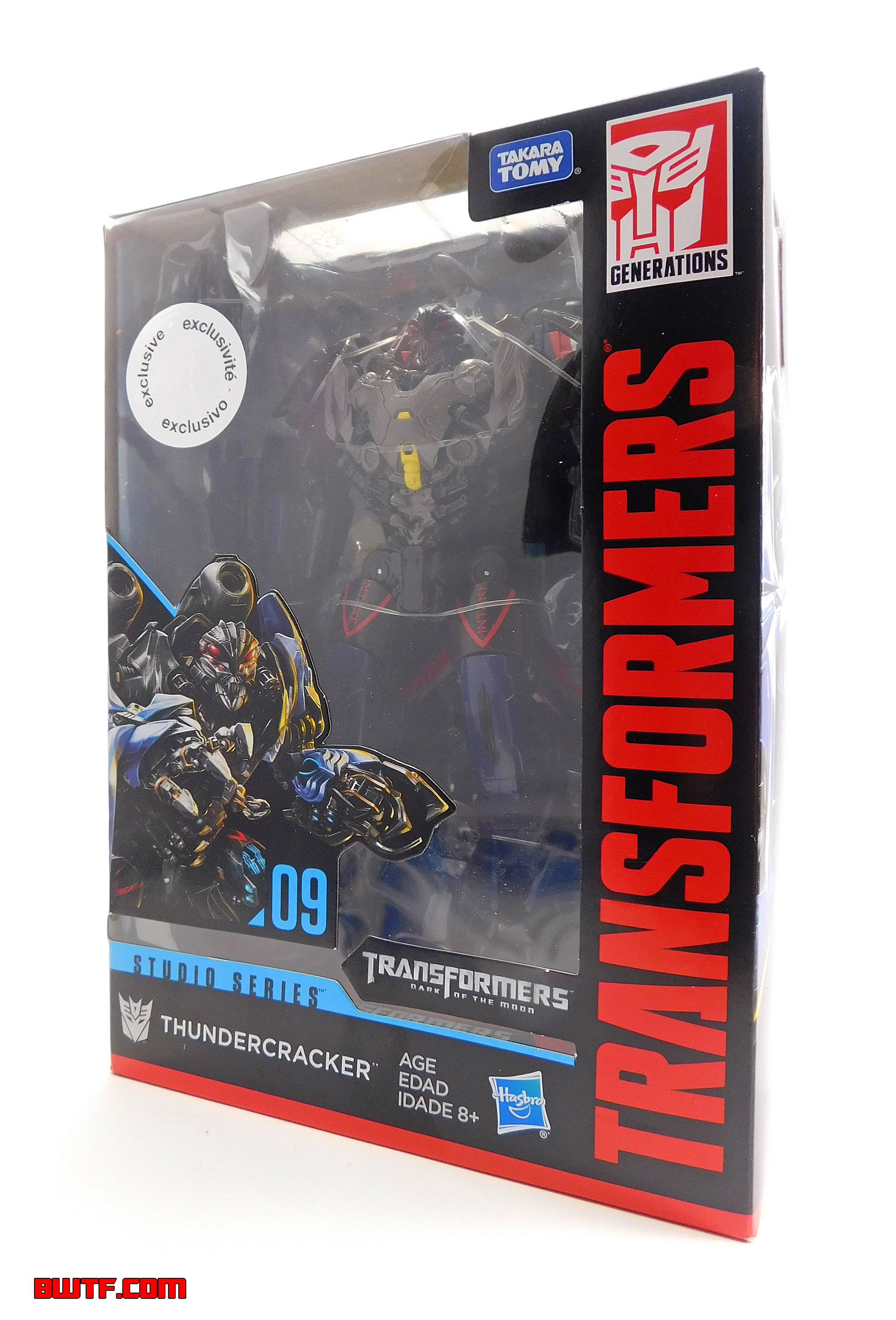 Packaging:
The Voyager Class Studio Series figures are packaged in boxes similar in size to the boxes used for "The Last Knight". The boxes are vertical rectangles with a large window in the front. Instead of the lighter colors of "The Last Knight" boxes, this box takes a more "Generations" style approach, using a black background and a vertical "Transformers" logo to the right. Above that is the "Generations" logo. Reflecting the new, unified approach to the Transformers toy line both Hasbro and Takara Tomy's logos appear on the front of the packaging. Towards the lower part of the box is the logo for the specific film the character comes from. In this case it is supposedly "Dark of the Moon" even though technically he did not appear in the film. To the left is the package art with blue borders. The artwork is actually an alteration of Nitro's package art featuring the new head sculpted for Thundercracker. The packaging also has package art on the side and a large collector number designated to each figure. In Thundercracker's case his number is 9. The idea is that you can line up all these figures on a shelf to show off the collection numbers. It's a neat idea and has kept me from tossing out the box so far.

The back of the packaging shows Thundercracker in both modes along with the logo for "Dark of the Moon". It also describes his transformation as having thirty five steps. Towards the bottom it shows you how you can take the cardboard insert from the inside of the packaging and use it as a display base and background for the figure. In Thundercracker's case he features a background in the air with jets and rockets firing everywhere. The background looks great and it's one of the best ones in the line so far. Below that is all the requisite legal information for the figure. 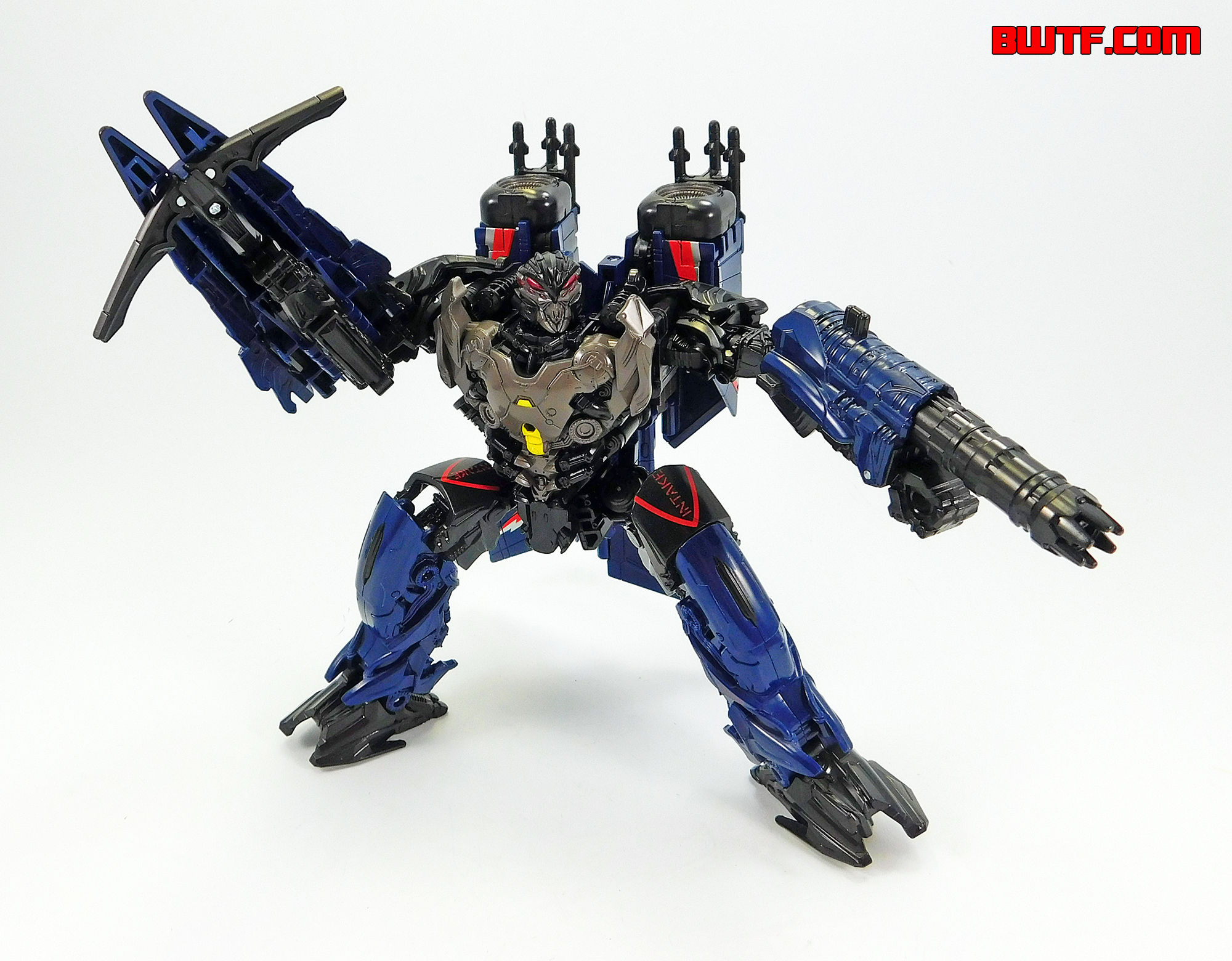 Robot Mode:
Thundercracker uses the same body as Nitro with a completely different head. For those curious, the designers kept the mechanism where the head can be detached with a "Titan Master" style connector. The head sculpt is a new design but it is heavily based on the design of Starscream's head from the live action films. I have always thought that Starscream's head looked like it was based on an insect's and Thundercracker's head takes that even further. It has a curved shape with a pointed crest section on top. The mouth area looks like mandibles and he has two large insectoid eyes with three smaller ones on each side of the head. It is a creepy looking head sculpt and I absolutely love it. It is very different than Nitro's head and it calls back to Starscream's head (and the head of the Deluxe "Dark of the Moon" Thundercracker figure).

While this figure uses the same body as Nitro, the deco is incredibly different from Nitro's. The base plastic colors for this figure call all the way back to G1 Thundercracker: dark blue and black. Dark grey paint is applied heavily to the torso and head with some yellow in the center of the torso. Metallic red paint is used for the head. Bits of black paint can be found here and there, particularly on the legs. The armor that overlaps the thighs has red, triangular designs on them with the words "Intake", indicating this is formed from a part of the vehicle mode's outer armor. The end result is a beautiful deco that makes this figure distinctive from Nitro while also paying homage to G1 Thundercracker.

There are seventeen points of articulation on this figure. All the joints are still nice and tight. Each fist has a 5mm port, allowing you to attach weapons from other figures. As mentioned above, the head can be detached so you can attach other heads to the body.

During transformation be careful with the thruster pieces. They can pop off fairly easily (they snap back on easily too).

Vehicle Mode:
The vehicle mode is the same as Nitro's, with no new parts. This fictional military jet is really sleek looking and it definitely fits the history of the character (though I will admit the F-22 form he previously had called back to the G1 version of the character more).

While you can still see black and grey if you flip the vehicle over, for the most part the dark blue color dominates this form. The cockpit is cast in clear plastic while some panels on the wings are grey. The nosecone, landing gear and rockets are black. Along the edge of the wings are white and red stripes that are direct homages to G1 Thundercracker. The stabilizer fins in the back also have red and white lines on them, but they are in a jagged, lightning pattern instead of straight lines. It adds a bit of flair to the character which is very cool. The wings also have large, black Decepticon symbols on them, another callback to G1 Thundercracker. The "Intake" details from the robot mode are now on the sides of the vehicle towards the front Overall I like the way the deco in this mode looks good on its own while still calling back to the history of the character.

Final Thoughts:
"Studio Series" Thundercracker is a beautifully done redeco that pays homage to both the G1 and "Dark of the Moon" versions of the character very well. This figure was released in early 2018, around the same time Toys 'R' Us announced its closure. As of this writing attempts to save Toys 'R' Us have failed, so this figure is likely the last of the Toys 'R' Us United States Transformers exclusive figures, following a long history of exclusives such as Springer and Cybertron. The Nitro sculpt was already a cool one, this is a great reuse of that figure. Recommended!