Official images and text below in italics are from Amazon.com:

The Autobots and Decepticons use Prime Masters to wield the incredible powers of the legendary bots who shaped the universe: the Primes. Prime Masters carry the spark of a Prime, allowing them to share a Prime's godlike ability with other bots. How will mischievous Decepticon Roadtrap wield this epic power? Anything is possible and everything is at stake when the Power of the Primes is unleashed! Transformers Generations Power of the Primes Legends Class figures are 3.75-inch-scale figures. When this Legends Class Roadtrap figure is in truck mode, spark mode Prime Master figures ride on top. It combines with the Power of the Primes Legends Class Battleslash figure to form a Duocon Battletrap figure. Additional figures are each sold separately. Subject to availability. Figure Specs: Legends Class Decepticon Roadtrap Modes: robot, truck Converts in 12 steps Combines with Legends Class Battleslash figure (sold separately) Transformers and all related characters are trademarks of Hasbro.

In Generation One Hasbro experimented with creating different types of Transformers figures that did more than just change from one form to another. One of these experiments were the Duocons. Each one featured a pair of vehicles that would combine into a robot. In fiction this would later be explained as the precursor to Triple Changer technology. Now with "Power of the Primes" one of the Duocons has returned: Battletrap! Originally Battletrap was a helicopter and truck that combined into a robot. In this new incarnation, each of the individual vehicles has its own robot mode and they still combine into one larger robot!

This review will focus on Roadtrap, with the combined Battletrap form to be reviewed separately. 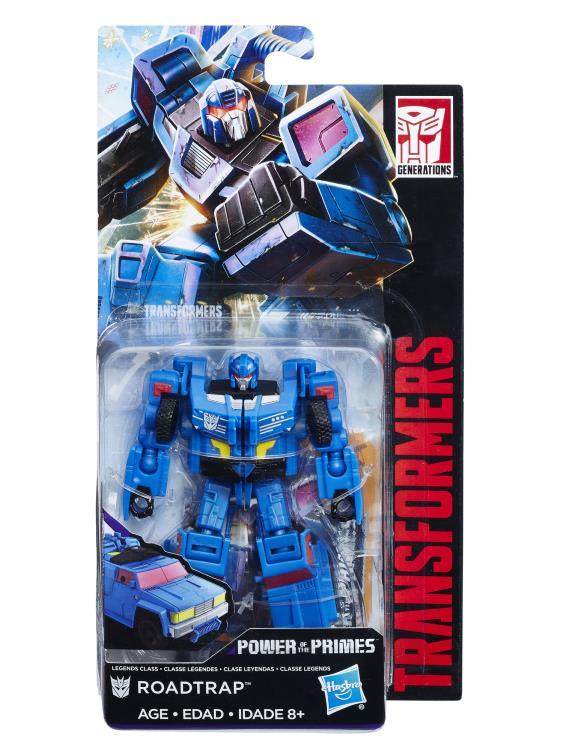 Packaging:
Roadtrap is packaged in blister card style packaging. The card features the "Transformers" logo in the front against a black background with the "Generations" logo above that. Most of the card is taken up by Roadtrap's artwork with a smaller "Transformers" logo on top, almost like a watermark. The art is colored in a beautifully painted fashion that recalls the artwork from G1 toy packaging. The figure is in robot mode inside the bubble with a collector's card behind him. The insert in front shows a photo of the figure in vehicle mode with the name "Roadtrap" printed next to an Decepticon symbol. Since this figure combines with Battleslash to form Battletrap, the side of the insert shows Battletrap's artwork! The back of the packaging features a grey grid with CG renders of the figure on top in both modes. Overall it's really cool packaging and I'm happy the art features so prominently.

The "Power of the Primes" figures from Legends Class up come with collectors cards. However, unlike the "Titans Return" cards which featured tech spec stats, these focus on what ability the character gets if they connect to a specific Prime Master Spark. This means there are thirteen potential card variations per character (one for each Prime)! In my copy of the Roadtrap figure I received the "Alchemist Prime" card scanned above. 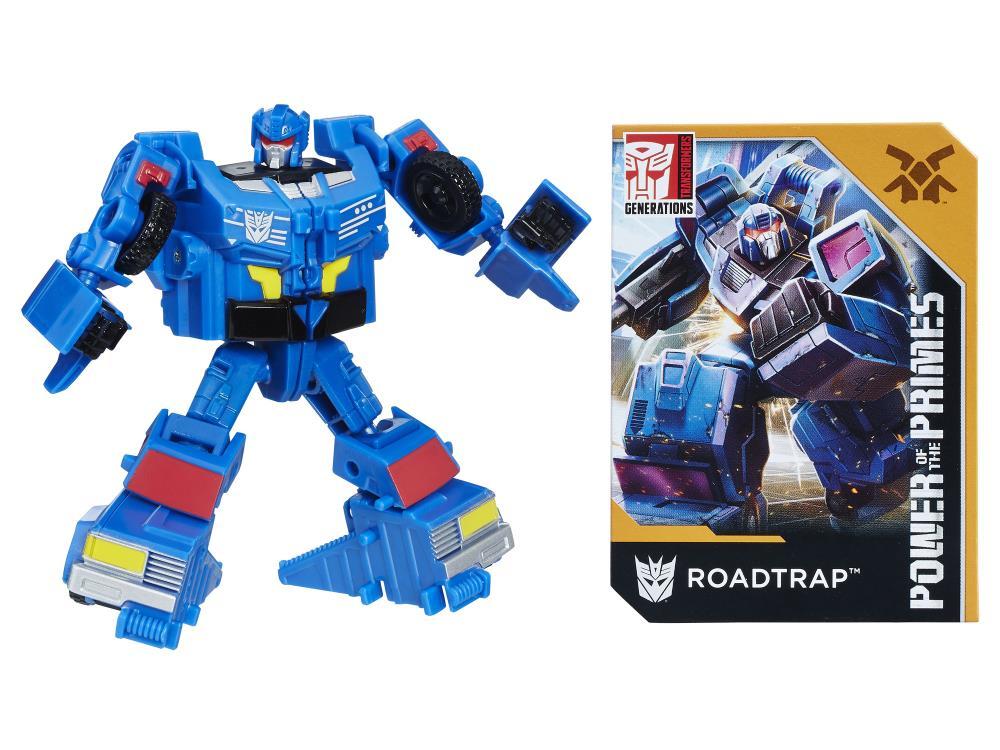 Robot Mode:
Roadtrap is basically a new character so he does not have to really adhere to any pre-established appearance for the character, which is unusual for "Generations" toys nowadays. This is great because it gives the designers some breathing room to create a "new" character design that still fits in with the G1-esque world of "Generations". Like Battleslash, Roadtrap has some bulkiness to him. Since he is part of a Duocon combiner and being a truck in his alt mode, this makes perfect sense.

The outline of this figure is a tough looking one, with wide shoulders, a bulky torso and huge feet that evoke the designs of the G1 Throttlebots. There are also some nice, smaller details including raised parts on the mid-torso area and some line detailing on the thighs. The head sculpt has bits that evoke the combined Battletrap's head, which I'm sure is no accident. Specifically the panels on the sides of the head and his crest evoke the look of Battletrap's head design.

This figure is cast in blue and black plastic. There is quite a lot of deco in this mode, which surprised me. Silver paint is found on the face, the top of the chest and the feet. Red is used for his eyes, shoulders and ankle area. Yellow is used on the mid-body area and the headlights on his feet. On top of all his is some black on the fists and waist area. Finishing up the robot mode deco are white tampographs on the chest featuring line details, circles and a Decepticon symbol on the right side. I know some of these details carry over into the vehicle mode, but I am still very impressed by how much there is to see in this form.

There are nine points of articulation in this form. While numerically that is not a lot, eight of these points are ball joints, allowing for a good range of articulation. Unfortunately, parts of the vehicle mode behind the arms prevents the arms from swinging back, but they can still move up and out to the sides. Each fist has 5mm port in it, allowing Roadtrap to hold weapons from other figures with a 5mm peg. 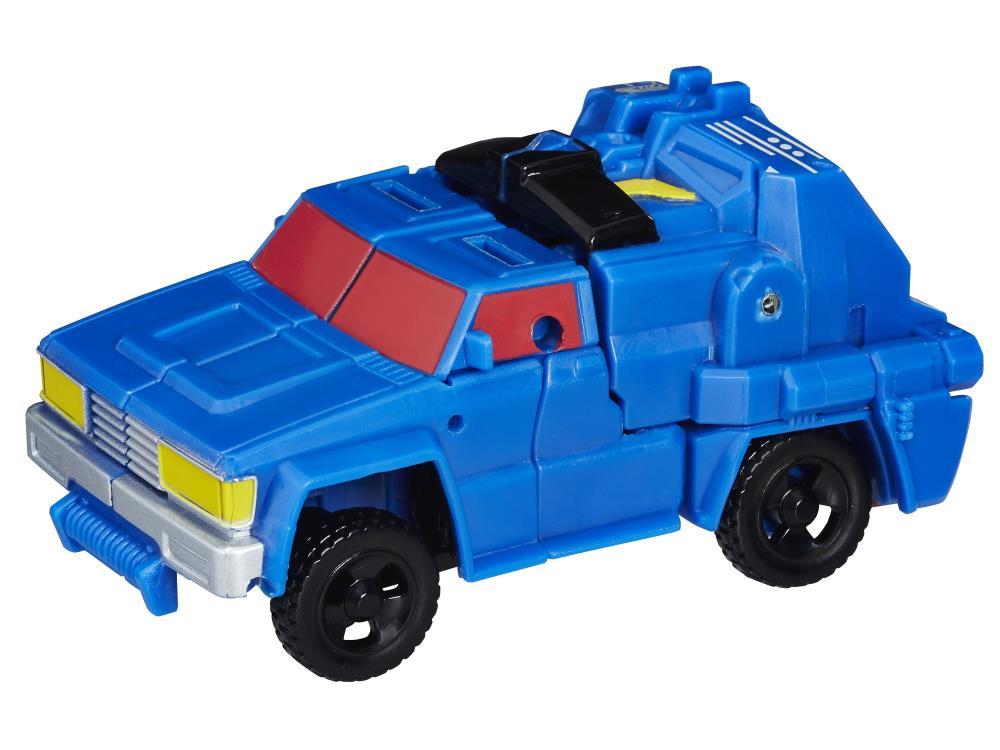 Vehicle Mode:
Roadtrap's vehicle form is based on G1 Battletrap's truck half. This truck has a somewhat retro design, befitting a truck form that was designed in the 80's. This is particularly noticeable in the front half, where the hood, headlights and grille are all rectangular and very boxy looking instead of the more curved and stylish trucks you see on the roads nowadays.

Where you lose a bit of the "robots in disguise" element is the back section. There are clearly robot mode chest design elements on the top of the vehicle and the back section clearly shows the robot waist and thighs. Knowing that this is meant to be one half of a whole robot, this does not bother me a lot. However, what does bug me is that the panels that form the sides of the vehicle really do not hold together well. I pushed them together a few times but as I moved it around for the photos above the panels kept moving, causing seams to form. It was pretty frustrating from an aesthetic point of view.

This form shows off a lot of the robot mode chest details on the rear half. The cabin section and the front are where most of the "new" details are. The cabin section windows are painted red. The headlights are painted yellow while the grille is painted silver. The colors look good and bright and I like how they contrast against the blue plastic.

Final Thoughts:
Roadtrap is a fun little figure, and I still dig the idea of each half of Battletrap being an independent Transformer. The vehicle mode is a bit weak, but this is made up for by the good deco in both modes and a robust looking robot mode.