Official product photos and text in italics below are from Amazon.com:

Build the Battlefield Beyond -- The siege is over, but the War for Cybertron has just begun. The Autobots and Decepticons have left Cybertron, but their battle rages on as they speed through space in pursuit of the Allspark. Now, fighters must instantly adapt to battle anywhere in the cosmos. With the advanced A. I. R. (Adaptable Interconnection Retrofitter) Locks system, fighters don’t head to the battlefield -- they become it. Bots capable of converting to Modular Battle Stations can A. I. R. -Lock together in custom configurations to fit the needs of battle. Earthrise collectible figures allow fans to build out epic space battle scenes, featuring figures that can convert into Modular Battle Station modes and connect together to expand the battlefield (each sold separately, subject to availability). The good-humored Autobot defensive strategist, Trailbreaker, converts to classic camper truck mode in 18 steps. Includes a blaster accessory.

Background:
When Optimus Prime led a crew of Autobots off Cybertron millions of years ago, one of the warriors who joined him was Trailbreaker. Trailbreaker is good natured but because he consumes a lot of fuel to operate he sometimes feels like he is a liability. This Autobot was featured in several episodes of the original series and more recently a different version of him played a major role in several IDW Publishing comic book issues (where he was known as "Trailcutter" due to trademark issues for a while). Over the years several figures based on the G1 character have been released including:

In May 2022, a Masterpiece Trailbreaker was announced, so this is hardly a character who has been forgotten over the years. Earthrise saw the release of another Trailbreaker heavily based on his G1 appearance. This figure is a retool and redeco of the Earthrise Hoist figure that was also used for Lift-Ticket. This review will focus on the changes made to the figure for this release. 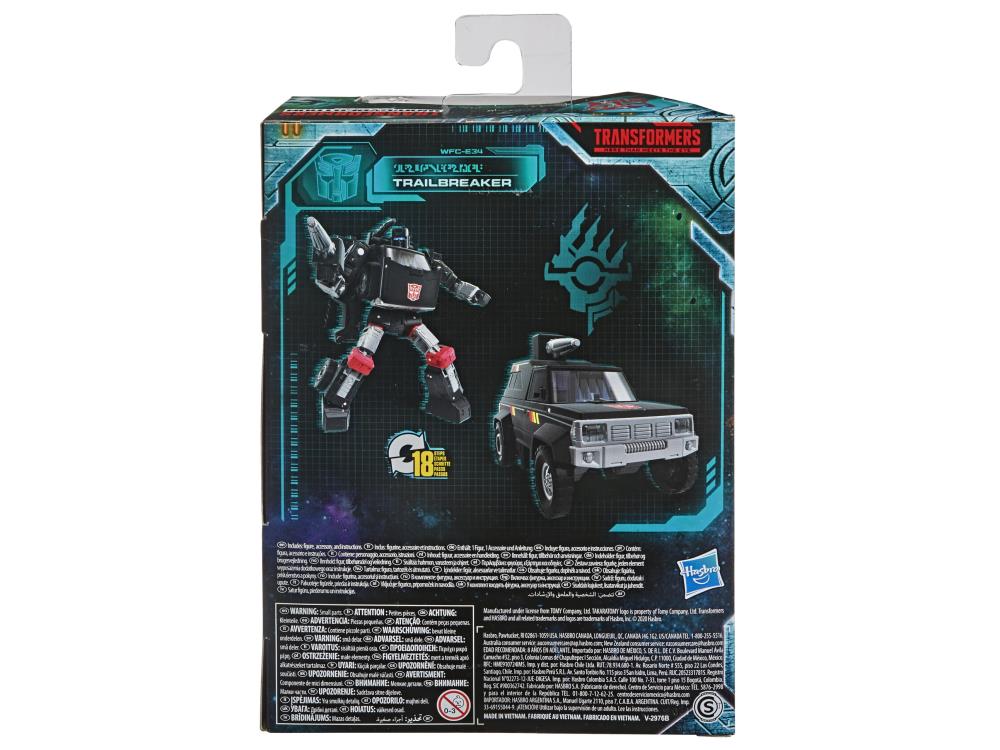 Packaging:
Trailbreaker is packaged in a standard Earthrise Deluxe Class box. The box is rectangular in shape but the left side is set at an angle. The figure is visible via a large plastic window. To the right of the figure is the Generations logo and under the figure is the Earthrise logo. The angled panel has Trailbreaker's artwork featuring the character charging into battle. The back of the box features Trailbreaker in both modes calling out an 18 step transformation. Continuing the use of symbols from Siege there is a large symbol next to Trailbreaker (though I could not find its exact meaning on the Hasbro Pulse article on the subject). 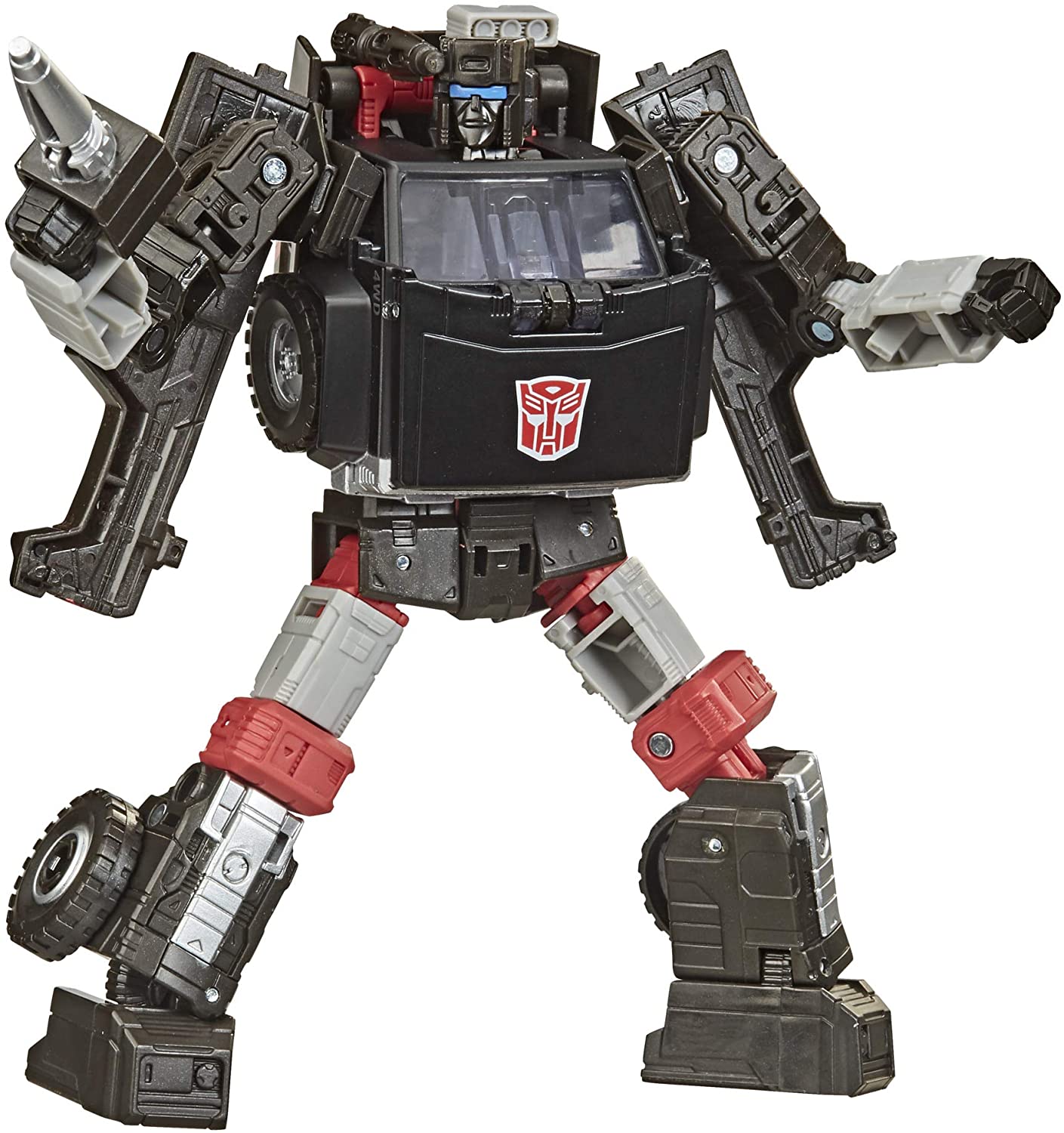 Robot Mode:
In G1, Hoist was redeco and retool of Trailbreaker, but in Earthrise that order has been reversed. This is not a simple redeco or head swap. The designers changed quite a bit to make Trailbreaker. Here's a rundown:

Add in the new "blaster arm/hand" and the figure really does look like an interpretation of the Trailbreaker animation model. He looks chunky and tough and I am very happy with the retooling of the base sculpt.

Trailbreaker is made up of black, grey, red and clear plastic. Black is the primary color, with grey plastic making up smaller parts like his forearms and thighs. Paint applications include silver, black and blue colors. The silver mostly shows up on the lower legs and torso and the blue is used for his eyes. Be warned: because of the way the front of the vehicle mode sits in robot mode, twisting his body from side to side could potentially cause scraping against the silver paint, so be careful. The finishing touch is a giant red and white Autobot symbol on the belly area. Overall I think this deco looks great and it fits the character perfectly.

There are twenty four points of articulation on this figure. This includes five in each arm and six in each leg. You could also include the ability of the blaster mounted on his backpack to move up and down slightly if you wanted to be generous. There are eleven 5mm ports in this mode including two on each arm, the and leg along with the fists and one on the back. The shoulders have attachment points for Blast Effects. You can also attach Blast Effects to his "blaster arm" and the over-the-shoulder blaster. 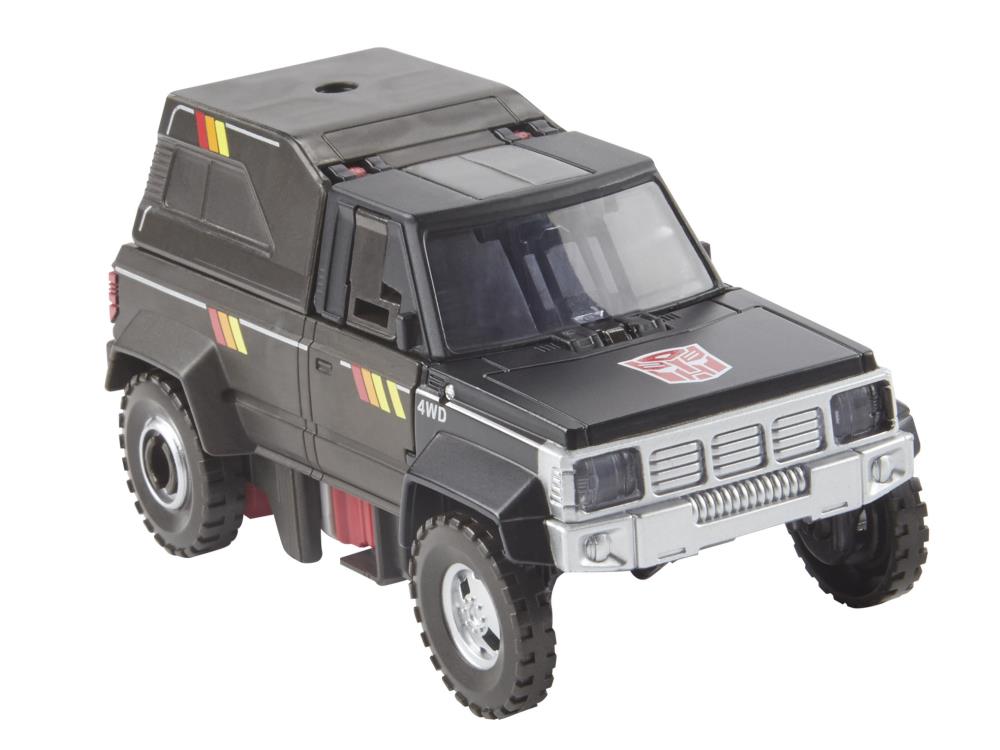 Vehicle Mode:
There have been many Trailbreaker based figures over the years, but most have sought to reinterpret the character's vehicle mode. For instance, in Combiner Wars he transformed into a pickup truck without any sort of canopy on the back. This time out however the designers decided to stick with the design of the original so he transforms into a camper truck. His general shape resembles the Toyota 4WD Hi-Lux truck from G1, looking a lot like a pickup truck with a canopy attached to the back. His wheels are also rather high, giving the truck some height which makes it look even bigger. Overall I'm impressed how much this looks like G1 Trailbreaker without being a licensed vehicle. It looks great!

This mode mostly shows off black plastic. The front grille and bumper area is painted silver. Running along the sides are silver lines and angled designs in yellow, orange and red colors. These details come right from G1 Trailbreaker's stickers and it looks wonderfully retro. Much to my surprise, the sides of the wheels are painted silver and the rear lights are painted red. These details are usually left out of most Transformers toys nowadays so I was very happy to see these parts painted.

There are three 5mm ports to attach accessories. Two on the sides and one on top. If you picked up the Selects Centurion pack it includes a radar dish to attach to the top of the vehicle.

Final Thoughts: I loved the Earthrise Hoist and Lift-Ticket figures and this is no exception. I love how much retooling was done and the way the designers used the G1 animation as their foundation for the design. The figure is fun to play with and looks great. Highly recommended!