Name: Sandstorm
Transformation: Helicopter
Motto: "There's a bad storm brewing, and I'm it!"
Sandstorm has adapted a new battle copter configuration... but can still scream across the desert wastelands like a turbo-charged fireball! Dual turbine engines make speed his greatest asset, and they also double as powerful laser cannons that fire air-to-ground laser bursts which explode upon impact. Watch out, Decepticons!

In Generation One, Sandstorm was one of the Autobot triple changers. Long before Transformers with two modes was common, the Autobot and Decepticon teams each had three members of their armies with a three mode conversion. For Machine Wars, Sandstorm seems to have sacrificed a mode to become a standard two form Transformer.

In reality, Machine Wars Sandstorm is a redeco and re-release of the Generation One European/Canadian exclusive Turbomaster named Rotorstorm (or simply Storm in some countries). 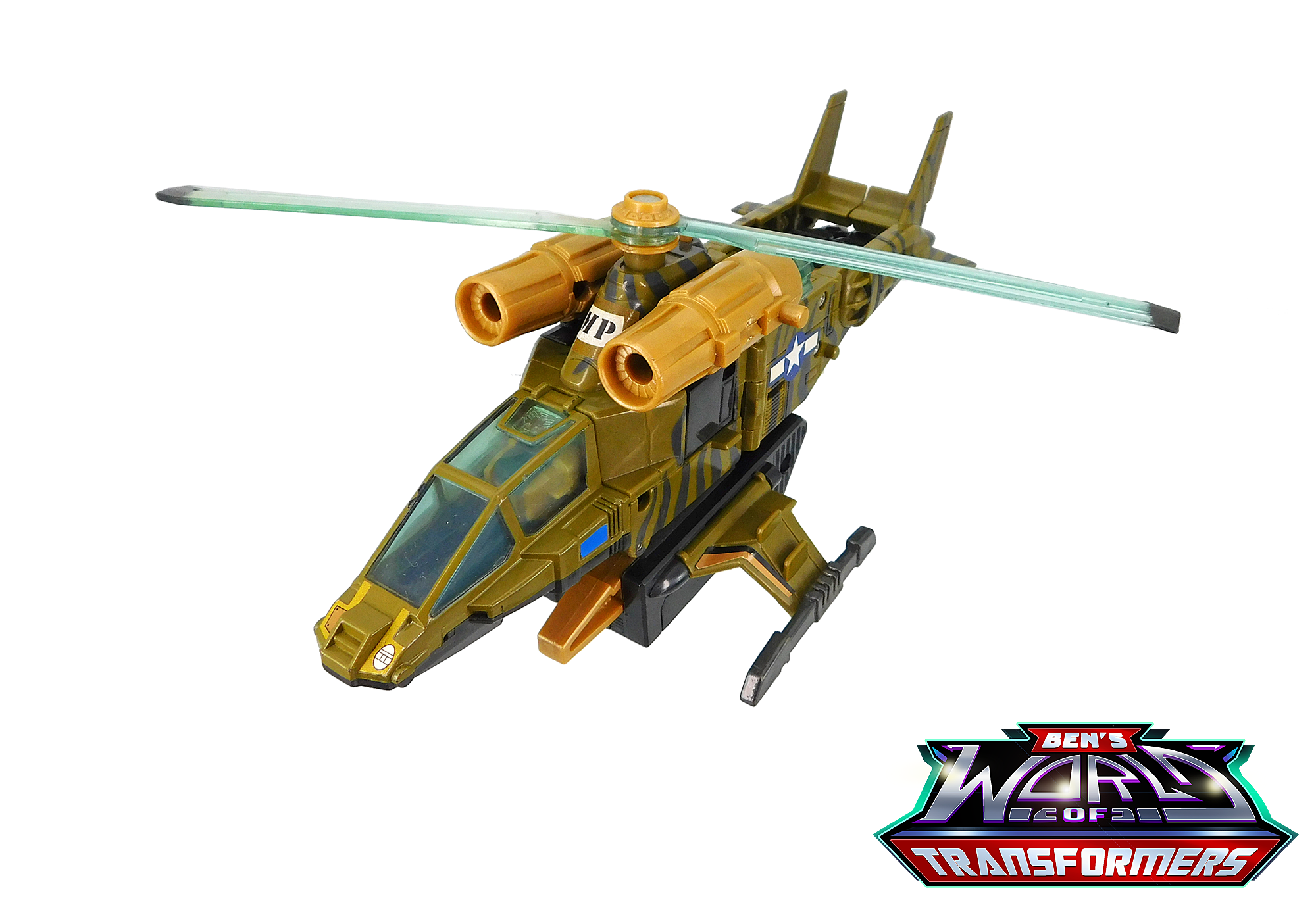 Vehicle Mode:
In vehicle mode, Sandstorm is a helicopter. His primary color is an olive green with dark green camouflage patterns. His weapons are gold and translucent light blue is used for the ends of the weapons, cockpit windows and the copter blades.

Harking back a bit to its Generation One roots, Sandstorm has several stickers for details. On the side of the helicopter is a large blue and white sticker with a star. A gold and black striped sticker runs along the edges of the arm attached to the helicopter skids. Towards the front of the cockpit, you will see two stickers that show a metal plate and what could be a scanner of some sort. On the rotor engine cover, a sticker says "MP" (which one can assume by the look of this vehicle stands for "Military Police"). This color scheme works very well in being different from the original (which was mostly blue) and still looking uniform and cool.

For play value, the helicopter blades to spin around and one can imagine the dual cannons packing quite a punch. However, in this toy's original release as Rotorstorm, he did more than just look like he packed a punch, he did. Rotorstorm came with missiles that could be inserted into the cannons and fired (note the odd holes in each cannon). Extra missiles could be mounted onto the skid arms making this look like one heavily armed coptor. However, Hasbro was good enough to keep in the ability of the weapons to be re-positioned. Just press the gold button near the blades and the two weapons drop to the sides.

This is a fun vehicle mode, but it would have been nice if the missiles were left in. This takes away some of the fun of the toy.

Transformation to Robot Mode:
Detach the cannons from the vehicle and set them aside for now. Fold the coptor blade in half. Fold up the rear fins of the vehicle. Now swing each half of the rear section forward. Fold the skids on the sides in, and then swing that entire piece back and straighten the legs out. Fold the gold pieces forward. Swing down the arms on the sides and the cockpit forward. Place the cannons in Sandstorm's hands and the robot mode is complete! 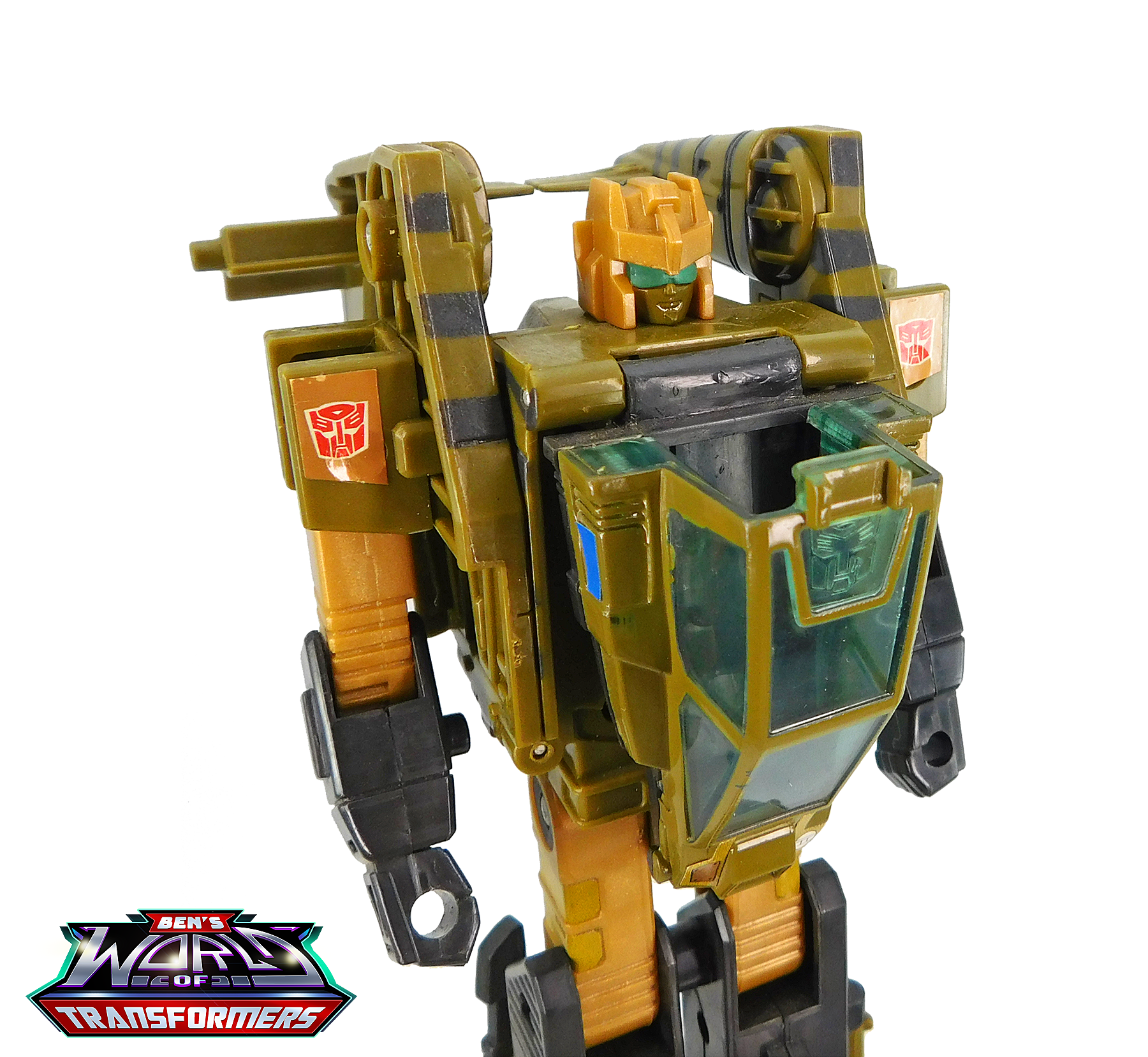 Robot Mode:
In robot mode, much of the helicopter's color scheme carries over. However, a little more gold and a couple new stickers make an appearance. The robot head is mostly gold with a green face. The robot eyes are translucent light blue. On either shoulder is a sticker with an Autobot symbol on it. At the time this toy was released, this was actually a refreshing detail since Autobots had not been on toy store shelves for about a year or so. The mid arms are gold an the lower arms are dark grey. His upper legs are gold and the lower legs are dark grey with yellow and black striped stickers towards the feet.

Sandstorm has nine points of articulation. Most of this is a stretch (like the arms being able to swing outward to the sides). However, considering the time frame this toy was made in, that's not too shabby. Sure they're not ball joints, but he can at least point his cannons ahead and to the sides! Seriously, this is one toy that is "blocky" in some sense of the word, but still looks very cool. The robot head is very nicely crafted and among the nice molded details is an Autobot symbol etched into the cockpit window (which is his chest). It is kind of a shame that the firing mechanism was removed from the cannons. Not only would it have been a neat play feature, but the big gaping holes in the cannons don't look good at all.

Overall, this is actually a very cool toy. During its initial release, it was pretty cheaply priced too, hovering at the $10 mark for a toy that is justifiably a "mega" size (and was packaged as such). If you can get it for under $20, I do recommend it. Anything over, and you may as well look for Rotorstorm. B+

Updated Thoughts (June 24, 2022):
By today's standards, Rotorstorm and Sandstorm lack a dynamic appearance that we take for granted in most modern action figures.  However, for its time, Rotorstorm and Sandstorm were super fun figures.  Now, Sandstorm loses out a bit due to not having Rotorstorm's missile launching feature, but there is a particular mystique around a figure that was not previously released in the United States suddenly becoming an exclusive to a chain of stores in the U.S.  Unless you're a completist I would not go crazy trying to find this figure but I personally have a deep affection for it (and the Machine Wars line as a whole).