Very early on in the life of the Transformers line the toy line began to move away from the sole gimmick of transformation. Once figures like Combiners were introduced it became clear Transformers could be more than just a robot that changed from one form to another. In 1987 Hasbro and Takara took a bold step into a new play pattern by introducing Headmasters. Headmasters were Transformers whose heads detached and became smaller figures that could then pilot or ride the Transformers in beast and vehicle forms (or in a couple cases, their battle station or city forms!). Now almost thirty years after they were originally introduced the Headmaster gimmick has returned in a new form: Titan Masters!

Titan Masters focuses on the return of small robots to Cybertron that can unlock incredible power, and it is up to the Transformers to merge with them and harness those abilities and strengths. In some ways the story resembles "Armada" which had a similar conceit for the Mini-Cons. In true "Generations" fashion, Titans Return gives us characters from the Headmasters era in new forms that pay homage to the originals.

Packaging:
The Titan Master figures are packaged on a bubble card. The front of the card is universal across the assortment. It features Fortress Maximus' head floating above his body. To the side is a black bar with the "Generations" logo above the vertical "Transformers" logo. The insert in the bubble has a render of the figure in head mode. The head and vehicle are in the area under Fortress Maximus' head. The back is almost universal in that it features a diagram of the Titan Master "eco system" showing that the heads can attach to Deluxe, Voyager and Leader Classes. The difference however is in the bar code, which is specific to each character.

In Generation One Apeface was a large Headmaster who fell into the sub-group known as the "Horrorcons". The name was apt as he transformed from a powerful robot to a jet and then a gorilla. In this new era of Transformers figures, Apeface has taken on a slightly less horrific form. Conceptually the designers have taken the various elements that made the original Apeface and split them up. The "Headmaster" (now Titan Master) figure represents Apeface's robot mode and head mode. The beast included with the figure represents the gorilla and vehicle modes from Generation One with an added bonus: a weapon mode. The result is an interesting conceptual experiment in the "Titans Return" line. 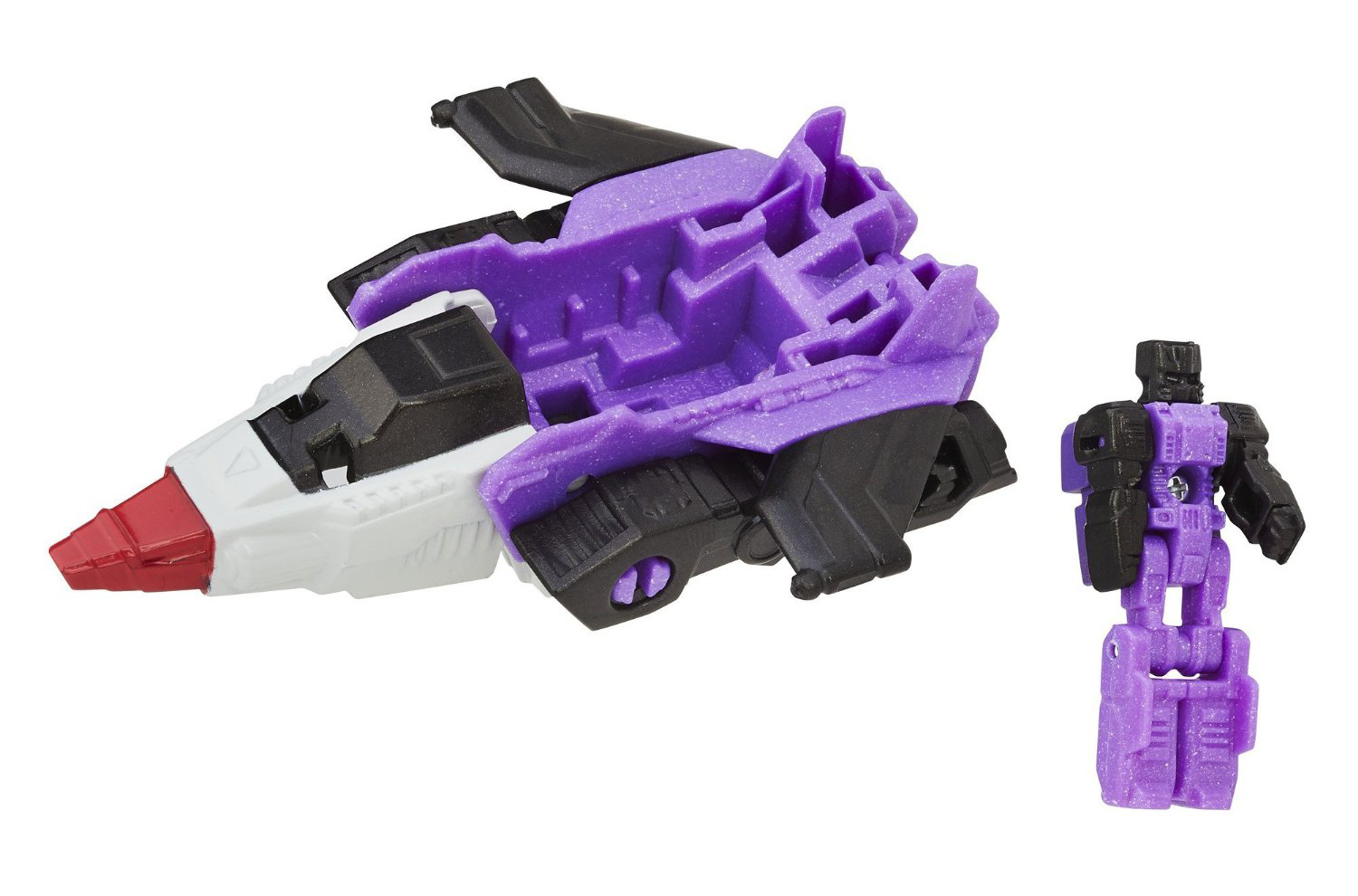 Robot Mode:
Apeface's robot form is based on the G1 Apeface figure and animation model. Key details carried over from G1 include:

Overall it's amazing how much detail the designers managed to carry over from the original Apeface in this tiny figure. I'm very impressed by the sculpt.

Apeface is cast in metallic purple and black plastic. Somehow the purple isn't quite as "sparkly" as it is on the beast/vehicle/weapon figure included with Apeface. Still these are the two key colors carried over from G1 Apeface and they look great contrasting against one another.

There are five points of articulation on this figure including the head and arms. The legs move together at the hips and knees.

Transformation to Head Mode:
Push the arms down to the sides and then fold the legs over the torso and you've formed Apeface's "Head Mode".

Head Mode:
As if having the basic sculpt of G1 Apeface and a vehicle/beast/weapon partner based on G1 Apeface wasn't meta enough, Apeface transforms into a head based on...wait for it...G1 Apeface! Featuring "crown" like details on top, thin, angled eyes and a distinct mouthplate with a "Y" like shape this looks like a sleeker version of G1 Apeface's head in robot mode. While G1 Apeface's head was very wide, this one is narrow and more proportional to the various Deluxe sized bodies that you can attach the figure to. The sculpt looks great, and it makes me wish there was a Deluxe Apeface figure to attach it to!

The front of the head mode is mostly purple plastic. The face is mostly painted silver while the eyes are black.

Gorilla Mode:
While Apeface stands alone as a robot/head, he is partnered with a transforming vehicle that also has a beast mode. The beast mode is a gorilla form based on G1 Apeface's beast mode. Like Titan Master Apeface's robot mode this sculpt features a pile of callbacks to G1 Apeface's design. Here's a rundown:

Like Apeface's robot mode I'm really impressed by the sheer amount of Generation One detail worked into such a small figure. The details look fantastic and I'm really impressed the designers not only looked at sculpted detail on G1 Apeface, but sticker detail as well when designing this toy.

Apeface is cast in metallic purple and black plastic. The metallic purple really shines on this figure and the black offers nice contrast. Grey and red paint are used to provide additional detail while also serving as call backs to the colors on G1 Apeface. Grey is used on the chest and back, while red is concentrated on the eyes (making them look extra creepy). The decos on these companion vehicles/beasts have been fairly light, so I'm happy with the amount of paint on this figure. The only thing I would have liked to see would have been a bit of silver on the arms for contrast and maybe a Decepticon symbol somewhere.

There are two points of articulation on this figure: the arms. They can move up and down and that's about it. However, you can also have Apeface stand on the back of the gorilla. The result is an odd meta figure where one homage to Apeface is riding on the back of another in the same toy set. It's really weird in a funny, appealing way (at least to me).

Vehicle Mode:
The vehicle mode is based on G1 Apeface's jet mode. Most of the key details from that form are here. This includes a nosecone that has a layered look to it. A cockpit cover that angles up in the middle and wings that sweep forward with points on the ends. The gorilla arms even wind up in the same place, giving the jet a bulky look like its G1 counterpart. Apeface does a good job of filling in details on the top. The legs have fin like sections on the sides that look like vertical stabilizers in this mode. Overall I love how much this mode pays homage to G1 Apeface.

The black and purple colors appear here too, with the front of the vehicle painted grey and red. These colors match up nicely with the G1 figure. I only wish the wings had been painted red as well. A small Decepticon symbol is tampographed on the left wing, which adds a nice splash of detail on that side.

Weapon Mode:
The weapon mode is a variation on the vehicle mode, so there's not much new to be said about it. I do appreciate that the front of the arms and nosecone all wind up looking like weapon barrels in this form, and the peg in the back gives enough clearance for most figures to hold the weapon.

Final Thoughts:
For some, Apeface will not be a satisfactory since they'll want a full fledged Deluxe or Voyager Class figure of the character and I get that. However, as it stands on its own this figure is fun and the sculpt offers some wonderful homages to the original. If you're into these little Titan Master sets at all this one is definitely worth adding to your collection, otherwise focus on the other classes.