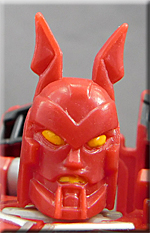 The theme for Botcon 2016 was the "Dawn of the Predacus", riffing off the "Beast Wars" Combiner character known as Tripredacus. The story told the tale of the fall of the Decepticons and the rise of the Predacons, featuring many Maximal and Predacon characters in their "pre-Beast Wars" forms. Botcon had played with this theme before in 2006 with the "Dawn of Future's Past" set, featuring vehicular forms for many Beast Wars characters. Interestingly this year's set seems more aligned with Hasbro's mass release figures, being labeled as "Combiner Wars" instead of "Timelines". That places this set of figures under the "Generations" banner instead.

General Ramhorn is one of the three Predacon Generals introduced in "Beast Wars" during the epic "The Agenda" three part series. These shadowy figures were shown to be behind the machinations of the Predacon government. Though they looked nothing like the "Beast Wars" action figures of the same name, this boxed set takes inspiration from the concept of the three being able to combine, adding in Ravage and Tarantulas (two of the Tripredacus agents) into the mix to create a proper "Combiner Wars" giant.

The base sculpt for this figure is the Combaticon Brawl. This sculpt is relatively new so it has not been used several times (yet). Interestingly the reveal of this vehicle as Ramhorn came before it was revealed that the Brawl figure would be retooled and given a new deco as the Technobot Nosecone. This makes it one of the few "Combiner Wars" redecos/retools that (sort of) received a "reveal" before its "source figure". 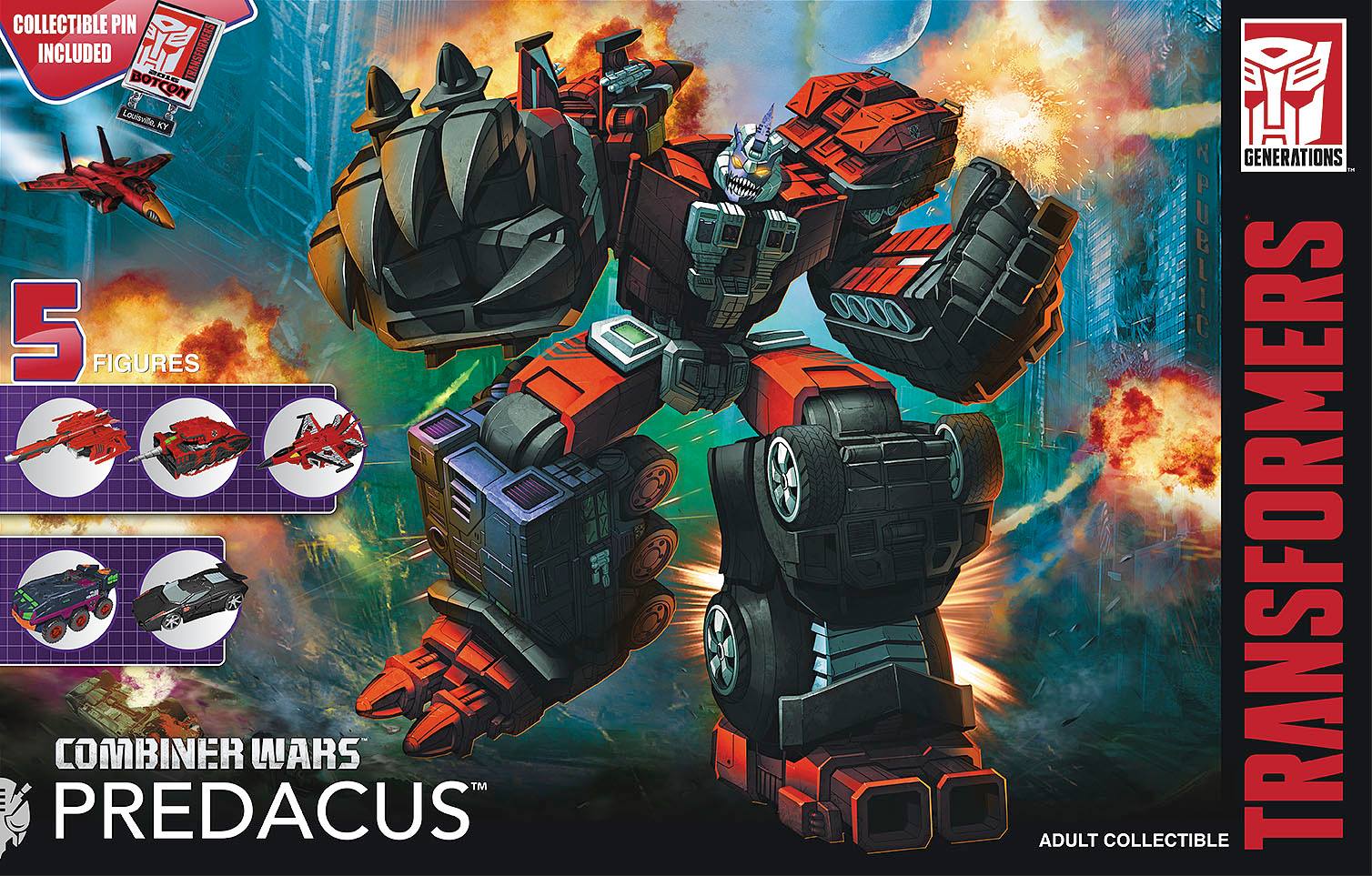 Packaging:
The Predacus set was available in two forms. The main packaging was a boxed set similar in style to those from past years. However instead of the "Timelines" label the set is under the "Generations" banner instead with "Combiner Wars" boldly printed on the front and sides. The right side (facing the box) has a list of "Special thanks" listing many names that have had a hand in Fun Publications over the years including Karl hartman and Pete Sinclair. Inside the figures are in vehicle mode couched inside foam. Underneath are the tech specs, instructions and accessories. The cover features gorgeous box art by Marcelo Matere in the style of other "Combiner Wars" giants.

Pre-registrants could also order a "loose" set during the registration process. This set included all the figures, accessories and paperwork from the boxed set (minus the pin) sealed in a large plastic bag.

Accessories:
Ramhorn's accessories include one new piece and one piece that came with Brawl. The new piece is a drill, replacing Brawl's cannon. The drill has a cockpit at the end and was created for the Nosecone redeco/retool of Brawl but given the character's name it kind of works for a vehicle that can barrel through enemies. It attaches nicely to the same slot as Brawl's weapon. The drill is cast in red with the drill painted silver. The cockpit windows are bright green. The other accessory is the same hand/foot/weapon piece that came with Brawl, except this time it is cast in red. Unfortunately the hinge piece at the base of the thumb is not as tight as the one that came with my copy of Brawn, but it's not super loose by any means.

Vehicle Mode:
Instead of a traditional military tank, Ramhorn is a drill tank in vehicle form. The sculpt is the same as Brawl's except for the drill. The interesting thing is that official photos of Nosecone from Botcon 2015 show the drill attached to what amounts to the rear of the vehicle. This does work by attaching the silver peg on the turret to the top of the drill right behind the cockpit. This winds up looking a bit odd however as the front winds up being tall and wide while the back slopes down, which is not how I traditionally think of a tank's shape. The drill fits on either side of the turret however so I think this can be left to your choice.

When the Tripredacus Council was introduced they were in cloaks with primarily red, black and grey colors showing. Based on that Ramhorn's main colors are red, grey and silver. For the purposes of this review I'll use my preferred transformation (the drill replacing Brawl's cannon on the turret) for reference. Red and grey plastic make up most of this mode, with the red concentrated on the turret and the front (or rear if you prefer) of the tank and grey making up the rest. A bit of silver is found on the turret and the front (or back depending on your perspective) where the "Combiner joint" is located.

With the red and grey colors being so dominant it is hard to see at first just how much paint there is on this figure but there is a lot. Red paint is heavily used on the sides of the vehicle, forming a lightning pattern on the sides, then leading to the treads. Interestingly, the edge at the top of the treads has been painted red. I was surprised by this since it's not a very obvious area to paint and it shows the attention to detail that went into this figure. Silver is also heavily used on the tank. Much of it winds up on the top, painting in the mechanical details partly hidden by the turret. Silver is also used to paint the wheels inside the treads, which really helps bring out their sculpted details. Some grey paint is found on the turret, painting the railings along the sides. Rounding out the deco are two Predacon symbols tampographed to the sides of the turret in black and white.

Both weapons attach nice and tight to the pegs on the turret. They also peg into the 5mm port on the turret without a problem.

Robot Mode:
General Ramhorn features a brand new head sculpt based on his appearance in the "Beast Wars" episode "The Agenda Part One". The head is an oval shape with a pronounced chin piece and two small bat-like wing structures on the sides. It's very distinctive and gives the character a rather evil appearance (which I'm sure was the point). The head is cast in red plastic with his eyes and mouth painted yellow. These colors are also based on his appearance in "Beast Wars" where yellow light would be seen coming out of his mouth as he spoke.

The rest of Ramhorn's deco is largely speculative, proposing a visual that really we never got to see on screen. This means Fun Publications was free to present a cool deco that fits with the color themes of the Council. This mode shows off a good combination of red and grey plastic, with red showing on the head, torso, elbows and thighs. Grey makes up the rest. The colors look great together but it is the paint that really makes it shine.

Red paint carries over from the vehicle mode on the arms, feet, waist and chest. Then silver is used on the chest, fists and legs to contrast beautifully against the grey and red. Spots of yellow are found on the waist/hip area providing some color continuity from the head. Overall the deco comes together beautifully.

Arm Mode:
Ramhorn's arm mode is a really bulky, powerful looking one. The colors work great with the other Tripredacus Council members since they match up in theme so well. From a functional standpoint the only thing you need to watch out for are the hinges in the middle of the robot form. if they are loose at all the Combiner arm will be loose. Otherwise I think it's a fine arm mode, though for a bulky vehicle and robot mode this isn't my preferred limb mode for this figure.

Leg Mode:
The Brawl/Ramhorn mold is basically a rectangular brick with a foot on it, so it works very well as a leg mode. It has a solid appearance which is what you want from something a giant robot is using as a foundation. I also love the look of the drill attached as both knee armor and a potential weapon. Like the arm mode, the colors match up very well with the other Tripredacus Council team members since they all share a color theme.

Final Thoughts:
Ramhorn is a really cool looking toy in both modes. His deco is really strong and I love the new head sculpt. He's not perfect however. The hinge at the center of the robot is potentially problematic (and has drawn much criticism from fans overall) and I think the "new" transformation for the vehicle mode is rather ugly (but that's easily fixed using the "Brawl" weapon placement).