*Images above with asterisks and text below in italics are from Amazon.com:

Riding with Swerve is a terrifying experience. The Autobot technician lives up to his name. His attention span is so short that he finds even exit ramps boring, which more often than not results in him drifting, uncaring, into oncoming traffic. So it's good he's partnered up with Flanker. The little jet is almost compulsive about scanning everything around him for Deception activity. And when his shouted warnings don't make an impression on Swerve, his impenetrable force field does a good job of protecting the other vehicles on the road. Pop into some "explosive" Transformers action with these fierce Flanker and Swerve figures! Your Swerve figure converts from robot mode to crossover vehicle mode when he wants to take the battle to the road. But your Flanker figure is a 3-in-1 menace! He can convert from robot to jet mode, and when the battle calls for it he converts to blaster mode! Will the Decepticons be able to handle your lightning-quick Flanker and Swerve figures? Only you can decide! Transformers and all related terms are trademarks of Hasbro.

In 2013, it was revealed that Hasbro had planned a continuation of its Legends Class of figures (that included 2013's Megatron with Chop Shop) with a current fan favorite character Swerve, and another character fans have great affection for: Cosmos. However, as the year ended and 2014 began, this wave seemed to have disappeared off the radar until reports of it showing up in Asia, and later Canada surfaced. The truth was revealed when BWTF interviewed Hasbro at Toy Fair 2014 and learned they do intend a mass release of these characters in the U.S. some time in the summer of 2014. This news was rapidly followed by BWTF sponsor Bigbadtoystore putting up preorders for the figures about a week after Toy Fair 2014. In the meantime, intrepid fans who are eager to get these pieces could get them via contacts in Canada or Asia, which is what I did. Special thanks to fellow fan Walter Mueller for helping me get these figures ahead of their U.S. release. 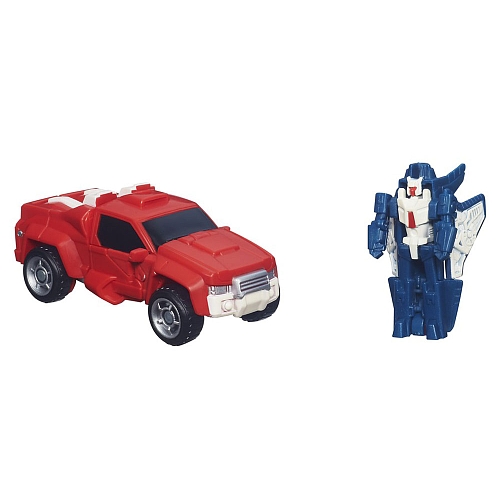 Flanker is one of many names this character goes by. In the original Generation One toyline, this character was known as Sky High, a Micromaster and member of the Air Patrol. Later, he would take on a new identiy and form as "Airmaster", a redeco of Skyhammer for the Japanese release of the Power Core Combiners series. His latest identity is "Flanker" (a name most likely chosen due to trademark issues), a name that actually belonged to another Micromaster character. However, the design of this figure was clearly based on G1 Sky High, hence this figure most likely represents that character using a different name.

Robot Mode:
Generation One Sky High was an airplane with some distinct design elements. This includes an angled torso design and a head with two crest like extensions sticking out the sides and legs that had parts of his vehicle mode wings sculpted onto them. His wings also had a distinct design on the edges, consisting of a row of horizontal lines running along the edges. The top of the chest had a distinct trapezoid like shape etched into it as well. All these details are present on Flanker, making his "G1 inspiration" unmistakable. This is Sky High reborn, no doubt. Even better? The designers decided to be so faithful to the design of the original figure that they even included an oval shaped design on the mid-body, representing the "screw hole" on the original toy where the torso plate was attached to the rest of the body! I love these little "wink and a nod" type design elements and this really shows how the designers try to appeal to fans even with simple design elements.

Flanker is cast in a dark, metallic blue and red plastic. The blue is a different from his G1 counterpart, who was mostly white in color. The red is used for the peg that comes into play in the weapon mode. Sky High's colors have not been forgotten however. The torso, head and the underside of the wings are all painted white. The torso and face have red detailing. The red and white are both colors found on Sky High, offering a color connection to Flanker's former self.

There are two points of articulation in this mode: the arms. In that sense Flanker is very much like G1 Sky High who also basically had arm (and limited knee) articulation.

Vehicle Mode:
Unlike Sky High, who transformed into an airplane, Flanker becomes something decidedly more military based, a drone based in part on the Alenia Aermacchi Sky-X Drone. Similarities include the rounded front end and the angled vertical stabilizers towards the back. There's even a raised section in the middle like the Sky X, though the actual shape is different. The wings are also different, avoiding potential licensing issues. The result is a rather futuristic and sleek looking vehicle. The edges of the wings have the aforementioned line pattern that helps form a visual association with G1 Sky High's vehicle mode even though the two vehicles are totally different.

This mode shows off the dark blue color more than any other. The wings have white line details on them with large, white Autobot symbols. It's a nice contrast and while you could complain there should be more deco, frankly military drones aren't generally the most colorful of vehicles so this fits the theme nicely in my book.

Weapon Mode:
Thanks to the hidden weapon barrel and the underside of each vehicle mode wing having a ton of detail, this mode looks very distinctive from the other two. It would've been easy to just have a peg swing down from the chest and have the nosecone serve as a faux barrel, but I really appreciate the extra bit of design and engineering that went into making this weapon look distinct. The barrel has some awesome detailing, all surrounding three barrels of firepower! The undersid eof the wings have details sculpted into them including a semi-circle with grooves inside and other shapes. Add to that some of the layered details on the robot arms and you have a very complicated and distinct looking weapon.

The newly revealed weapon barrel is painted white, offering a visual connection to the white on the sides (from the underside of the wings). The red peg is most visible in this form.

The primary functionality of this figure is based on the 5mm peg that allows you to use Flanker as a weapon for any figure with 5mm ports. This essentially makes him a Micromaster and Targetmaster (not to mention a triple changer) at the same time, which is awesome in my book.

Robot Mode:
Swerve has popped up now and then over the years since his original G1 appearance. However, he never really made a huge impression until he became a feature character in the IDW Comic Books. Since then he's become one of those special category of characters who were largely ignored for years and then exploded in popularity. His appearance in the comic book was an update of his G1 toy's form, and this toy in turn is based off that IDW representation, bringing the character's appearance to a full circle.

While Swerve's proportions may change depending on who is drawing him, certain elements remain consistent. This includes vehicle mode wheel son his arms, overlapping sections of armor on his legs and a distinct chest pattern that has two trapezoid shaped sections with horizontal lines inside. His head design has a rounded helmet with a crest in the center and visor eyes. On either side of the robot head are raised sections that also have horizontal, vent=like lines in them. Often seen as gregarious, his mouth has been sculpted into a rather happy expression for this figure. Indeed, this figure manages to represent these various details very well and looks great.

Swerve is cast in red, white and black plastic. The red makes up most of the back panel, arms, head, waist and lower legs. The white is used on the torso area while the wheels are black. Plenty of paint applications are used to give him detail at a level above what is seen in the comic books. Silver paint is used to paint the vent lines on his chest and on the sections that flank his head. White is used on the raised sections on the lower legs leading to the feet. It's also used for his face. His eyes are painted blue and a red Autobot symbol graces the center of his chest. While he does have some differences from his comic book counterpart, I think he looks great. Frankly, leaving the vent lines unpainted would've made the toy look very plain. The silver helps break up the white and looks great.

There are nine points of articulation on this figure. This includes six ball joints (shoulders, elbows and hips) so his range of articulation is pretty sweet. I'm stretching a bit and counting the head since it can swing back and forth giving him limited head articulation. Each of his fists feature a 5mm port so you can attach any 5mm peg weapon (including of course Flanker in weapon mode). He also has a 5mm port on his back (by virtue of the vehicle mode's functionality) so he has built in weapon storage.

Overall this is a fantastic robot mode and update of the character. It works on many levels. It's a neat toy on its own, but also represents the comic book version of the character well. It also serves as a cool G1 update (part of the idea behind the "Generations" line). Awesome work.

Vehicle Mode:
Like his G1 counterpart, Swerve is a pickup truck in vehicle form. However, his G1 counterpart was somewhat blocky while this truck is very sleek and modern looking. The front end is curved, the hood curves back to the cabin section and even the rear bed section has some sleek lines on the sides. These do contrast against some angles such as the sections over the wheel wells and the air intake on the hood. There' ssome nice finer detai lincluded such as the grille in the front of the vehicle, sideview mirrors and even rear lights culpted in the back. The wheels also have a nice groove pattern in them along with nicely designed rims. I'm ecstatic Hasbro has moved a bit away from the cheap looking "snap on wheels" seen in the latter days of the "Transformers Prime" line.

This mode mostly shows off the red plastic, but the black of course shows in the form of the wheels. The colors are largely based off the G1 toy here, with the windows colored a shiny black and the front of the truck being a mix of silver and white. The white lines from the robot mode legs appear on the truck bed, a bit of a carry over feature from G1 Swerve whose truck bed was mostly white. And while I have mentioned it in other toy reviews here and there, I am extremely grateful that the rims on the wheels are painted silver. This was a small, but significant detail that was being left out of "Transformers" figures for a while so it's great to see them back.

The top of the cabin section features a 5mm port that allows you to attach Flanker in weapon mode (or any weapon with a 5mm port). It definitely adds some play value and "punch" to an otherwise innocuous looking vehicle.

Final Thoughts:
Swerve looks absolutely fantastic in both modes and he's a welcome addition to any "Generations" collection. I really appreciate the meshing of different design elements (G1 and IDW) into a cool looking and fun figure. Highly recommended!