Images above with asterisks (*) and text in italics below from the Toys R Us web site:

Power is all that matters to Megatron. It is his means, his motive, and his goal. It is the core of his being. His every thought is only of how the might of his armies can bring ever more power into his hands.

Gear up for awesome robot-to-vehicle action with this fierce Megatron figure! In robot mode, the leader of the Decepticons can whip his 2 swords out of his hidden scabbard for a double-fisted assault against his Autobot enemies. When he needs even more power to mow them down, convert him to jungle tank mode! Keep converting him back and forth so he can handle whatever his enemies throw at him!

With an ever expanding market in Asia, Hasbro China announced in 2011 the release of several Transformers redecos for the "Generations" line that (at the time) were intended for a purely Asian release. However, fans got one whiff of this and they wanted these toys on the spot! Many of these redecos were rather inspired, while others were head scratchers. Either way, Hasbro US saw fit to find a channel to bring these toys to the US, in new packaging to boot! In an ironic move, while the Chinese versions of these characters were released on purely English packaging, the US releases have Chinese characters on them, representing their "exclusive" origin. You may sometimes hear these figures referred to as "GDO" Transformers. For those curious, this is not a Transformers term, it is an economic one, standing for "Global Development Organization".

Part of the Voyager Class figures released in this line was Megatron, the leader of the Decepticons. The base sculpt used was the Voyager Class Bludgeon figure from "Revenge of the Fallen". This review will cover the changes made to the figure for this release. Check out the Bludgeon review for an extensive look at the details of the sculpt. 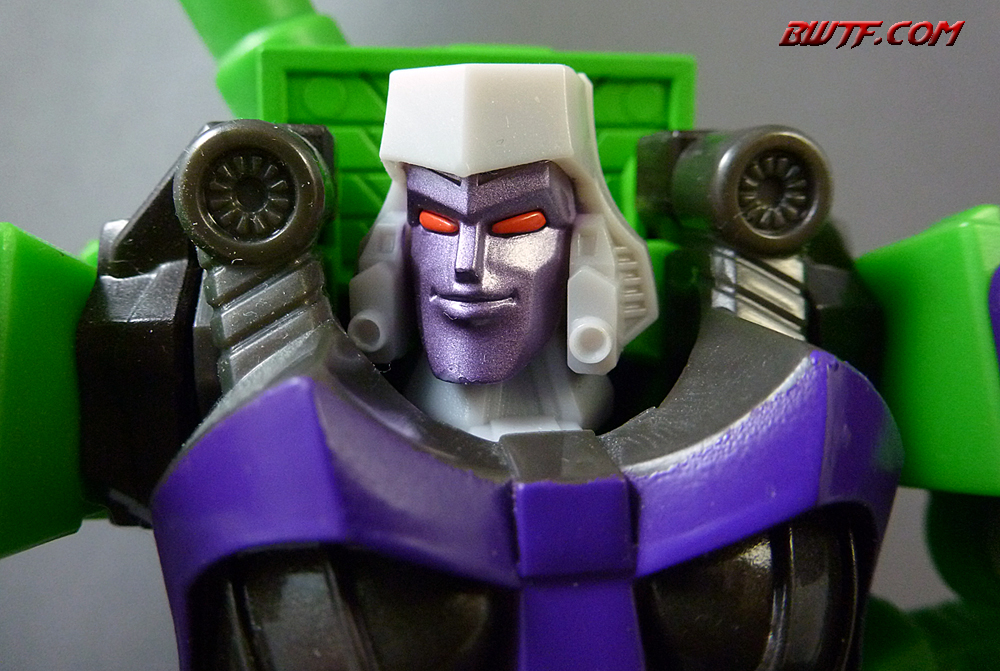 Robot Mode:
Unlike the Bludgeon release of this figure (and the subsequent Banzai-Tron redeco) this version of the figure is packaged in robot mode in an attempt to give it more of a powerful visual impression on shelves. One of his primary plastic colors is a bright green. He also uses light grey, gunmetal, dark brown and purple. Soft purple plastic is used for both of the weapons, making it easier to fit the weapons into Megatron's hands but also allowing the design to show a sharp-looking, thin blade as well.

If all this sounds like one wacky combination of colors, it's hardly new to the toy line. To understand this unusual combination of colors, you have to go back to the early 90's and the "Generation 2" era of Transformers. During that era, Megatron took on several forms, one of which was a large green and purple tank. At theh time this color palette wasn't unusual, especially in the "Transformers" toy line where a lot of bright colors permeated the designs of Autobots and Decepticons alike. With the base Bludgeon sculpt being a tank, this probably felt like a natural redeco choice.

Paint applications on this figure include gunmetal grey, silver, orange and purple. Most of the color is concentrated in the upper body. The gunmetal colors his shoulder details and chest. The silver forms a large Decepticon symbol on his waist armor and some smaller details on his back. Metallic purple is used to color the face, while a bright orange is used for the eyes and several raised sections of the tank mode's armor. This combination of colors with the plastic may sound somewhat garish, and I guess you could see it that way depending on your personal taste. I think the purple and gunmetal parts really help balance out the figure. Sure the green armor calls out some very bright spots, but they don't by any means dominate the color scheme.

Megatron features a new head sculpt, based on his Generation 2 appearance. This iteration of Megatron's head has a crafty and evil looking smile on its face, akin to the smile he had in a page of the G2 era G.I. Joe/Transformers crossover when he first reveals this new form. It has the requisite Megatron head design elements including a "helmet" section that has a raised section towards the base and a pronounced brow above the eyes. The head sculpt looks great in person, much better than it did in promotional photos.

This figure comes armed with two weapons, a Sword and a smaller Sword, based on the Japanese Katana and Wakizashi respectively. The swords are made of soft plastic, so they bend rather easily so be warned. Many came warped right out of the package because of the way they were tied to the packaging. Sticking the blades into their respective "sheaths" in the turret section helps to straighten out the weapons. The weapons can also be slid into a holder on the left hip. There, a small piece of the green armor slides out to accomodate the weapons. All of Megatron's twenty plus articulation points are nice and tight, allowing the figure to stand in a variety of poses and just generally look awesome. His arms are designed to allow you to have him hold his sword with both hands, which looks fantastic. If you want to stow the weapons away, the Katana (the longer sword) fits into the turret cannon, forming the end of the turret. The smaller sword fits into a sheath inside the tank turret, slide it open and put the sword in, then push it back into place. From a functional standpoint, this is definitely a fun toy to play with. 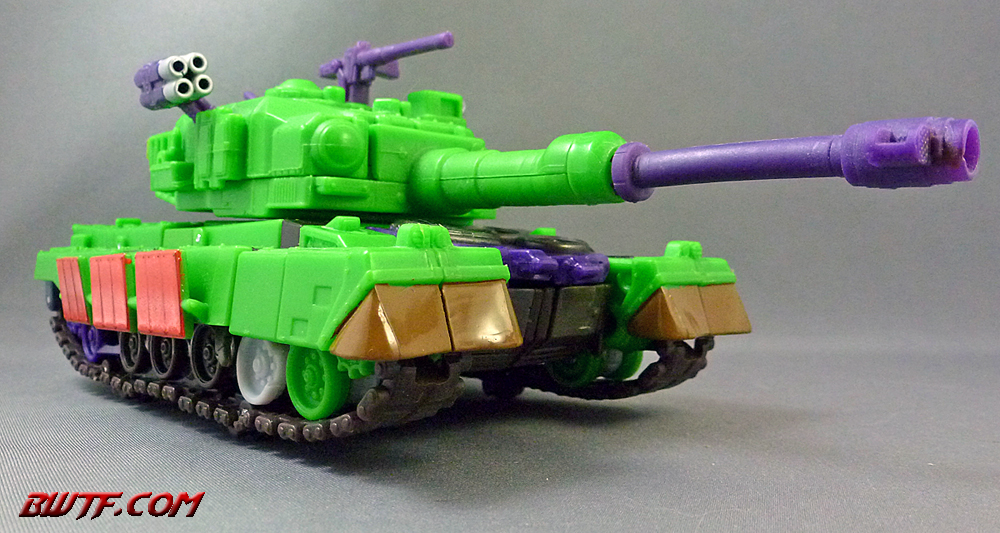 Vehicle Mode:
The tank mode is the form where this version of Megatron shows its roots. The green color makes up most of the tank, but it's a bright green, especially when all the panels are concentrated like this. Other significant parts like the machine gun, rocket launchers and turret barrel are all purple plastic - the other key color seen in Generation 2 Megatron's deco. Unlike his G2 counterpart, this Megatron does not have purple camo patterns all over him - though I think that would've been awesome. Instead, the decos here are a lot more "clean", including silver on the rocket launchers and turret and a big black Decepticon symbol on the left side towards the front. The other "Generation 2 inspired" colors are the bright orange armor panels running along the sides of the tank. A bit of gold shows up in this form at the front of the the vehicle, adding another splash of color. Despite the lack of camo patterns, I think this tank does a great job of paying homage to the Generation 2 version of the character.

The tank turret is able to turn completely around (an advantage it has over its G2 inspiration). While parts of the treads are rubbery, the vehicle actually rolls on four tiny wheels on the underside of each tread section. The turret's ratchet joints click nicely and it holds in place well (in both modes). The little wheels on the treads roll as well as you can expect for tiny wheels.

Final Thoughts:
As redecos/retools go, this figure is definitely very niche. This figure is very much directed at older fans who remember the "Generation 2" era and will appreciate the homage being done here. Add to that the sculpt is excellent and a super fun toy. Mind you, the design still screams "Bludgeon" more than "Megatron" in robot mode, but the deco is cool and you can tell the hearts of the designers were in the right place. Recommended!